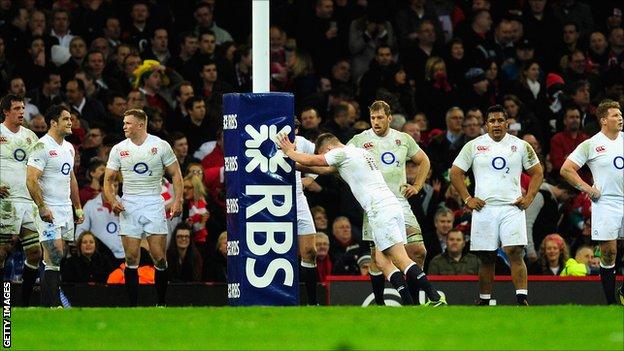 Wales stormed to the Six Nations title after securing a 30-3 win over their bewildered opponents, who themselves had been aiming to win the Grand Slam.

"This is better than the Grand Slam last year. We were outstanding."

"It was when 70,000 cavorting Wales fans started chanting, "Easy! Easy!" that you finally flushed all pre-match predictions down the gurgler and reached instead for the record books."

But England coach Stuart Lancaster says his side for the defeat.

Woodward, who won the World Cup with England in 2003, was in Cardiff to watch Wales demolish an England side that had been unbeaten throughout the tournament - having also defeated world champions New Zealand 38-21 in November.

But they were comprehensively defeated by their Welsh opponents, who retained their Six Nations title as a result.

"Wales were absolutely fantastic, man for man they were better," added Woodward.

"England had a good Six Nations but when it really came to it, man-for-man, they were not as good as Wales. It was a bad day, but this is a young team, they have to grieve for a few days and then get back on the horse and come back better.

"They are building a team for 2015. It is a young pack but the way Adam Jones and Gethin Jenkins tore into the England front row was the difference. It was a huge learning experience for the players and the coaching team."

Lancaster admitted to being "gutted" following the defeat, but backed his side to learn from the experience and use it to help them improve.

England's coach also said the 2013 Six Nations had been a positive for his side, with four wins out of five, and that he was "proud" of their overall performance.

Speaking on BBC Radio 5 Live's Sportsweek show, he added: "We have to take it on the chin and move on.

"There is still an upwards curve and we will be better for this experience in the long run. We're all in it together.

"We had less than 300 caps going into a game of this magnitude and have developed a lot in 12 months. I do believe in the journey we are on. This is a down but we will hold our nerve and stick to the plan because I think we will come good."

And Woodward paid tribute to the job Lancaster had done since taking charge in January 2012 but warned he must learn the lessons from the defeat.

"We had some big setbacks [when I was in charge]," added Woodward, who coached England between 1997-2004 and lost three Grand Slam games before finally clinching one at the fourth attempt in 2003.

"You have to grieve, look in the mirror and then get back out there. He has done a great job, took over at a difficult time, but he will learn from it.

"International rugby is a brutal thing, he will have a tough 12 months coming up and it was an eye-opener.

"The rest of the world would have taken notice of that, the bubble has been burst and teams would have seen who they [England] are and what they have to do to beat them."