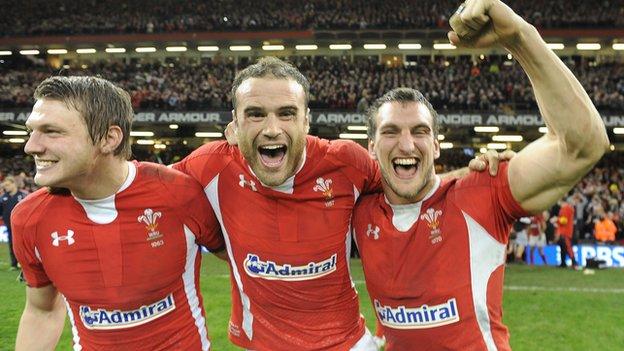 Centre Jamie Roberts believes there is more to come from Six Nations champions Wales following the win over England.

Wales clinched the title and denied England a Grand Slam with a 30-3 victory at the Millennium Stadium.

Roberts, 26, who will leave Cardiff Blues at the end of the season, has now won three Six Nations titles with Wales.

"I think there is more to come, that's the scary thing," Roberts said.

"Our defence is outstanding, there is more to come in attack, and competition for places is very good in the squad. That is what drives us forward as a team.

"When you have got competition like that, you are on your toes and you are only ever a game away from being dropped.

"That is what drives us forward more than anything, that competitive edge. You don't win championships with 23 players, you win it with 35.

"Guys like (lock) Andrew Coombs, who would be disappointed after losing his starting place after the first few games, have been magnificent in this tournament.

"It's guys like that who win championships, guys who are maybe holding the tackle pads in training and put in the hard work when they're not in the starting XV."

Having lost to Ireland in their opening game, Robert Howley's side won away in France,Italy and Scotland to set up a title decider against England.

Wales needed to beat England by eight points to secure the title but put in a stunning display to beat Stuart Lancaster's side 30-3.

The victory on the final weekend of the Six Nations meant they retained the championship for the first time since 1979.

Interim coach Howley has hailed the 2013 Six Nations title as a better achievement than the Grand Slam they secured 12 months ago.

"Chatting to a few of the boys, if anything it's a better feeling than last year," Roberts added.

"From where we've come from in that first half of the Irish game to winning on the road - three on the bounce - and finally delivering at the Millennium Stadium, it's very pleasing.

"We took a bit of a beating from a lot of people after that Ireland game, and certainly the run of results (eight successive defeats) leading up to that. It was a very hard place to be.

"But it just goes to show the resilience of the boys.

"Rugby is 90% attitude, and the resilience the boys have shown during the last six or seven weeks has come to the fore."

Roberts's build up for the game against England had included sitting two final medical exams during the week.

"Yes, it's been difficult and there is a lot of pressure," Roberts said.

"But I made sure I worked hard enough three months ago. I sat down then, had a word with myself and knew I had to do hard work back then.

"It's not about turning up two weeks before the exams and working hard. It's about putting that work in place so that come the Six Nations I was just topping up my knowledge.

"The exams were pretty tough - I don't think they were meant to be easy - but hopefully I've managed to combine the two, and if I pass I will be a very proud person.

"It's just a big thanks to the medical school for helping me through it, and to Rob Howley and the Welsh Rugby Union as well."