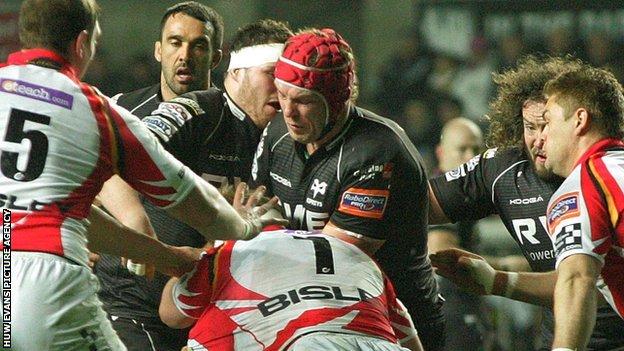 Kahn Fotuali'i, Tom Habberfield, and Ashley Beck went over before the break.

Tom Isaacs secured the hosts' bonus point before Dan Evans went over for the visitors.

Dan Lydiate returned following six-month absence with a broken ankle to rekindle his bid to make the 2013 British and Irish Lions tour on the Dragons' flank.

The presence of a host of Wales' Six Nations winners may have been viewed ahead of the clash as giving the hosts a huge advantage over Welsh rugby's regional strugglers.

But the spark that gave the Ospreys the early momentum came from an altogether different source - Samoan scrum-half Kahn Fotuali'i.

The half-back, who joins Northampton at the end of the 2012-13 campaign, went over for a classy early score.

And his cross-field run from a line-out gave centre Beck the chance to ghost through for the Ospreys' third try.

In between wing Habberfield, who has also played at scrum-half, displayed his own poise and pace to score.

The Dragons' only first-half points came from fly-half Steffan Jones and by the time the visitors mustered any significant further response, the Ospreys had already secured a four-try bonus point.

Lydiate - as planned by the Dragons - did not appear for the second-half on the Dragons blindside.

And he could only watch from the side-lines as the Ospreys' potent attacking threat gave wing Isaacs the chance to run clear with Fotuali'i providing the final pass.

Full-back Evans was rewarded for his efforts in an out-classed side by providing brief respite for the Dragons with a well-worked try.

A sweeping attack in which Beck went close on the right before the Ospreys switched their focus back across field ended with Biggar going over unopposed.

Another of Wales' Six Nations stars and Lions hopefuls, Faletau, snapped up loose possession to burst clear and slide over for the Dragons' second try.

Replacement prop Arhip emerged from a driving maul to claim his first Ospreys try and Tipuric rounded off a memorable week by profiting from a cross kick to run clear.