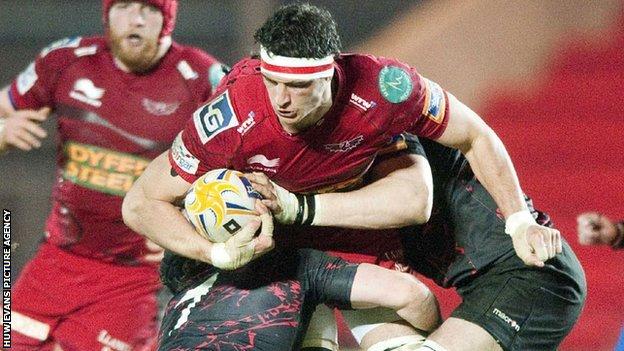 The Scarlets kept themselves in the hunt for a Pro12 play-off place with this victory over bottom side Zebre.

Fly-half Owen Williams, who has signed for the Leicester Tigers next season, slotted over 14 points with the boot.

Wing Williams, along with flanker Aaron Shingler and centre Scott Williams, who both made a late appearances as a replacements at the Millennium Stadium, were both in the Scarlets starting line-up.

The Scarlets slipped to fifth place - one place outside the top four play-off places - but they are on equal points with the reigning champions, the Ospreys, who are in fourth place after their bonus point win over the Dragons at the Liberty Stadium.

Coach Simon Easterby saw his side fail to record a bonus point in Italy but they are still in the race for a first play-off place with five games of the regular season still to play.

They would have been disappointed not to have recorded a bonus-point win at the Stadio XXV Aprile before kick-off but will be happy to return home with a win against an improving Italian outfit.

Zebre started with real purpose and full of confidence after Italy had finished the Six Nations with their first victory over Ireland in the tournament in Rome.

The home side had Venditti and lock Quintin Geldenhuys in their starting line-up, while fly-half Luciano Orquera was in the Zebre bench.

The home side, who still have not won a game in their first season in the Pro12, made the perfect start when South African-born number eight Dries van Schalkwyk crashed over from short-range after a lineout near the Scarlets line.

Fly-half Paul Buso missed the conversion, but his opposite number for the Scarlets, Owen Williams, landed two quick penalties to put the visitors 6-5 ahead.

Wing Liam Williams, who was part of Wales' Six Nations squad, stretched the Scarlets lead with a well taken try on the 42nd minute to make it 11-5 to the Welsh side at half-time.

The Scarlets South African-born second row Johan Snyman scored a stunning solo try, running in from 55 metres, to put even more distance between the visitors and their host. Fly-half Owen Williams added the conversion and a fourth penalty to make it 24-5.

Italian wing Venditti, who was moved to the centre for Zebre, then took advantage of some poor Scarlets defence to haul his side back into the game with the home side's second try.

The Welsh side found themselves down to 14 men with five minutes to go when Shingler was yellow carded for a professional foul after he slapped the ball down when Zebre were on the attack, but the visitors held on.