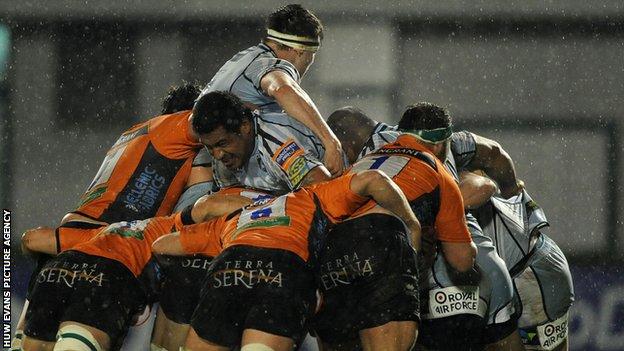 The match was evenly balanced until the dying stages when the hosts' superior scrum paid dividends.

And having gone to Italy hoping to play expansively, the Blues found the poor weather conditions against them.

Phil Davies' side had to rethink their approach, leaving them exposed to the hosts renowned forward power.

However, flashes of the tactics that the visitors intended to employ were evident as centre Hewitt was set free by returning Wales Six Nations back-up scrum-half Lloyd Williams.

The Blues' line-out enjoyed a moment to savour when another of Wales' extended Six Nations squad, Reed, latched on to a loose Treviso throw to go over.

But at the other set-piece, the scrum, Treviso's dominance also paid dividends as they forced a penalty try, converted by Di Bernardo.

Andrews had been on the field since the 41st minute and committed his sin at a ruck.

But his absence was a further blow to the Blues' effort.

And as the pressure mounted, Di Bernardo kicked his final points to deny the Blues a losing bonus point.

Replacement Paul Derbyshire was denied a late try after he was judged to have knocked on in the process of gathering Di Benardo's clever grubber.

The outcome changed nothing in the table as Treviso remained eighth with the Blues a place below.