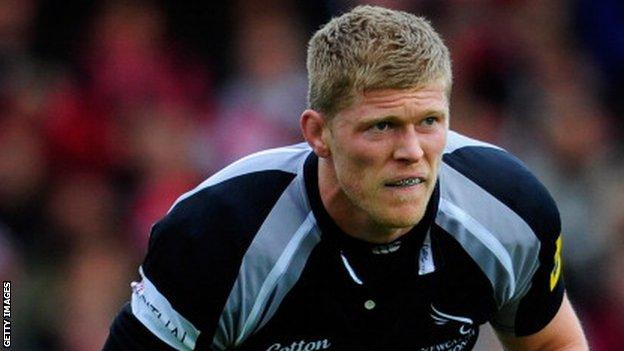 Gloucester have signed Newcastle Falcons lock forward James Hudson for next season on a three-year deal.

The former Newcastle skipper, 31, is returning south after previously playing for Bath and London Irish.

"He's a proven Premiership performer and a very shrewd lineout operator. I'm very much looking forward to him arriving for pre-season."

I've always enjoyed playing at Kingsholm as an away player, it's a fabulous stadium with a passionate crowd

Hudson will move back south after four years with the Falcons, during which time he captained the side for two seasons.

Hudson will fill a space in the Gloucester squad created by captain Jim Hamilton's decision to play in France next season.

Davies added: "James is very mobile for a big man, which will suit the way we try and play the game.

"He will also bring experience and leadership qualities to the squad, which will be valuable assets."

Hudson has made more than 100 Premiership appearances and has also been capped by England Saxons.

He said he had enjoyed his time hugely with the Falcons and wanted to leave the club on a high.

"They've been a massive part of my career, and I'm fully committed to playing my part in helping them regain their Premiership status before I leave," he continued.

"However, I felt that now was the time for a new challenge. I've always enjoyed playing at Kingsholm as an away player, it's a fabulous stadium with a passionate crowd.

"And talking to Nigel Davies, I was excited about his plans for the future for Gloucester and my potential role within that. It was something that I decided I definitely wanted to be part of.

He added: "My priority now though is to finish what we've started at the Falcons and, hopefully, I'll be facing Newcastle as a Gloucester player in the Premiership next season."