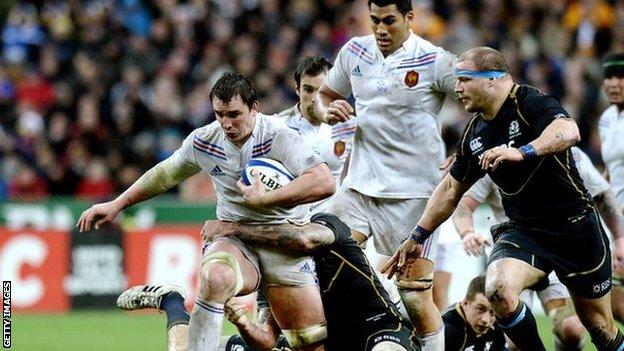 I'm frustrated for Scotland: I think they wanted to play a more expansive, attacking game but again, the weather made it a very tough proposition.

They kicked the ball early in the phases and even approaching the French half, off slightly slower ball and near the touchlines.

Greig Laidlaw opted to put the pressure on their back three through contestable kicks and clever grubbers to the corner.

I like the option but, barring one dropped ball by Vincent Clerc, Scotland failed to recover possession in the air.

With Scotland playing this tactic so often this tournament France cleverly dropped talented number 8 Louis Picamoles into the role of catcher which will have something to do with the poor conversion rate.

Chasing kicks is a very tough skill and needs a lot of time and work put into it but in international rugby it is a key aspect of the game.

If you've read my previous columns, certainly from the Wales and Ireland matches, you would see a very similar analysis of how Scotland played the wet conditions. So I won't bore you with all that again.

I thought the defence stepped up another notch: there was intensity in the hit and the post tackle work, either 'jackling' on the ball or winning the space over the ball, something that defence coach Matt Taylor is very big on.

The scene was set with a strong hit by Johnnie Beattie in the opening minutes on Mathieu Bastareaud and continued by the front five in particular throughout the game. They put pressure on Frederic Michalak and he didn't look comfortable during his time on the pitch and was often forced to carry the ball himself such was the pressure on him.

So, why did Scotland wait until the last 10 minutes to challenge the French outside defence? Scotland scored a fantastic set-piece try and created other opportunities in the wide channels in that time.

It's amazing what happens when you 'have to' play as time's running out and you need tries. This happened in the last five minutes of the Welsh game too. But how do you translate this into the first 70 minutes of the game?

Primarily, you need the confidence. You can't be thinking of the potential negative outcomes of playing the ball wide or keeping the ball in hand. Scotland showed that they do have the skills to do this and against a French defence that traditionally pushes up very hard in the middle of the field but are more passive on the edges.

I had thought that Scotland could trust these skills a bit more in this particular game. Saying that, with the French lineout malfunctioning and with the tough conditions the tighter game-plan was understandable.

An area of concern will be the kick-off reception. When you've scored, the next target is to take the ball and re-start the game with a set-piece outside your half.

But too often this Championship, and in particular the last two games, Scotland have failed to do this, gifting the opposition an easy way back into the game and giving them field position either through a dropped ball or a skewed kick.

France won this game, in my opinion, because they had the fire power - that maybe Ireland lacked - to finish off a Scottish team tired from the amount of defending they'd done.

The amount of French possession took its toll and the power runners of Wesley Fofana and Picamoles came to the fore in the third quarter.

It's a difficult Six Nations to summarise for Scotland. Four of the five games were played in wet conditions and this limited how they approached the matches. Scott Johnson will be satisfied with two wins and delighted to be third in the table after the final game.

There is a lot to come from this group of players and there appears to be plenty of spirit and 'l'envie' which is imperative at this level. The players will have gained confidence from this campaign and must back themselves in every game they play in.

We shall see the progress made in the summer. However, I wonder how many players will miss the upcoming Scottish tour to South Africa through other playing commitments with the Lions in Australia…