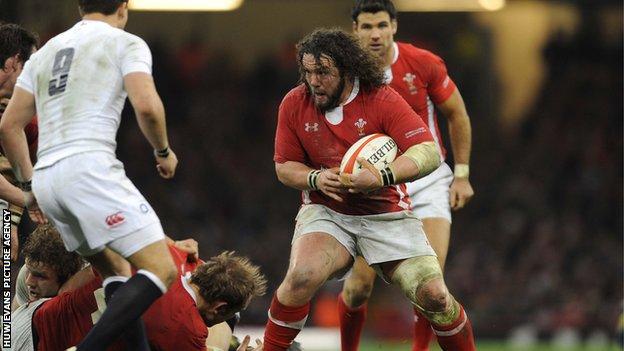 Prop Adam Jones wants Wales to start beating the best teams in the world after retaining the Six Nations title.

Wales beat England 30-3 on Saturday to win a fourth Six Nations title in nine years but wins over southern hemisphere sides Australia, New Zealand and South Africa have been harder to come by.

Their last victory against any of the world's top three sides was a 21-18 win over the Wallabies in Cardiff in 2008.

"We have never really kicked on," said Jones, who has been capped 88 times.

"When we have won Grand Slams we have always made a mess of the next year.

"But this year we have backed it up by retaining the title, so it is a case of keeping it going."

Jones believes it is vital Wales back up the quality of their Cardiff performance when they next meet the All Blacks, Springboks and Wallabies.

Wales travel to Japan for two Tests in June while South Africa are scheduled to visit the Millennium Stadium on 16 November.

"Jamie Roberts said there is more to come attack-wise, which is obvious and we have to kick on now," Jones said.

"We have a lot of young boys coming in to join the core of experienced players and it is looking good for the future."

The 32-year-old produced a performance against England that makes him a front-runner for the British and Irish Lions Test side to face the Wallabies in the summer.

And he considers Wales' one-sided demolition of a Grand Slam-chasing England as one of the best performances he can remember.

"I think it was the most complete Wales performance of my career," he said.

"We knew how they would approach the game. We wore them down in that first half and in the second half our quality players told.

"It was the best performance I have been a part of and it was made even more special by the atmosphere in the stadium, which was just incredible."