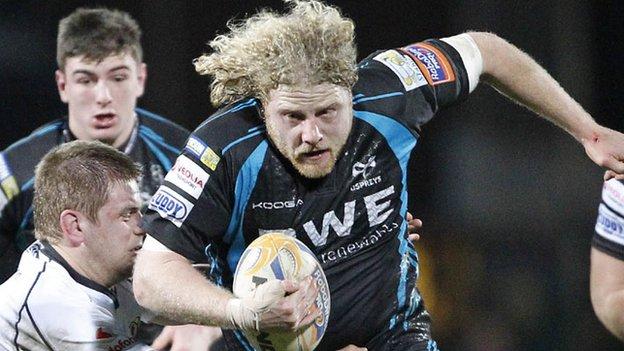 Former Wales captain Duncan Jones has signed a two-year extension to his contract with the Ospreys.

Loose-head prop Jones has been with the region since it was set up in 2003, and his new deal will keep him at the Liberty Stadium until the end of the 2014/15 season.

"I'm delighted to have sorted out the next couple of years," he said.

Jones last played for Wales as a replacement against Australia in November 2009.

"This is my home region and I've always enjoyed playing here," said Jones.

"I think we are at the start of another new challenge here [at the Ospreys], right now.

"A lot of the faces have changed and I think it is an exciting time. We've got a lot of youngsters starting to make their mark and I'm pleased to be around to help in whatever way I can to help keep the Ospreys at the top."

Jones has always been closely associated with his Ospreys prop partner Adam Jones, their trademark long curly hair styles earning them the nickname "the hair bears".

"Duncan has been outstanding for the Ospreys since day one," he said

"It's great to have people like Duncan in the environment, sharing his knowledge and setting the highest standards for both himself and the wider group."