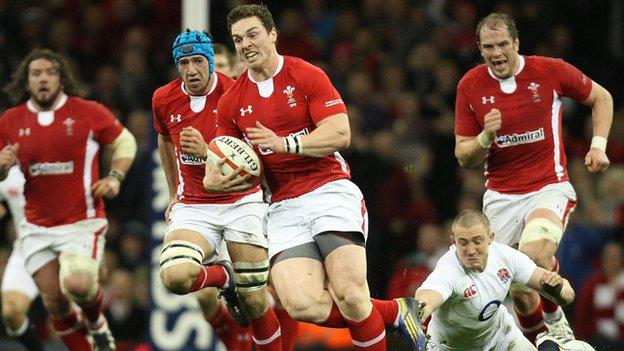 Scarlets and Northampton are holding talks over the possible transfer of George North from the Welsh side.

The Wales international winger, who has won 31 caps, has one year left on his contract with the Scarlets.

North's agent Christian Abt says the 20-year-old does not want to leave the Scarlets, but confirmed: "There has been an approach between the two clubs to discuss a possible transfer."

The Scarlets said they would not discuss players' contracts publicly.

However, his current contract with the Welsh side runs out at the end of the 2013/14 season, and though insisting North was not actively seeking a transfer, Abt warned one could take place soon.

"I don't think it will drag on too long," he said.

"I think these things need to happen quite quickly if it's going to happen so that each party knows where they stand.

"It's counter-productive to sort of drag on and for the player as well to know where he will be, so ideally I'm sure it will resolve itself in the next couple of weeks."

North was a key member of the Wales team the clinched a second consecutive Six Nations title with a 30-3 win over England in Cardiff and is also expected to tour Australia with the British and Irish Lions this summer.

If North was to join the Saints, he would be the latest in a long line of high-profile players to leave the Welsh domestic game for England or France.

Fellow Wales stars Jamie Roberts and Dan Lydiate have already confirmed they will be playing outside Wales next season.

Abt claims the financial difficulties facing the Welsh regions is a factor in the talks over North's future.

"Unfortunately it's been well documented it's been a difficult time for some of the Welsh regions financially," he said.

"They are looking at finding ways to work within a business model which makes financial sense for themselves to go forward and be sustainable in this current market.

"George is under contract for another year at the Scarlets and as far as I'm aware there's ongoing discussions between [Scarlets] and possibly a few other parties with regards to a possibility of George moving on from the summer.

"There has been interest from [other] Premiership outfits as well as French clubs expressing an interest as to when he might be out of contract.

"It's not something that we've really actively pursued, it's very much a case of understanding where he is in terms of the situation in Wales and trying to ensure that whatever happens going forward is in his best interests in order to progress his career."