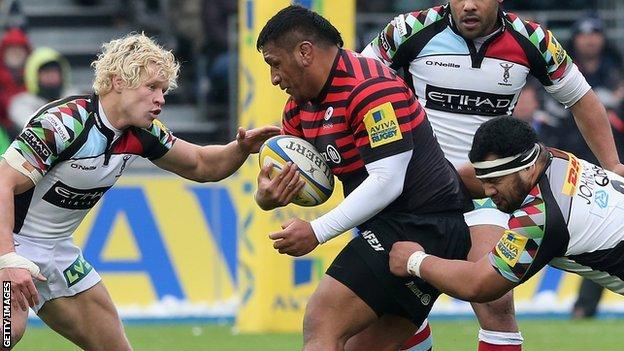 Saracens completed an Aviva Premiership double over Harlequins to move five points clear at the top of the table.

Owen Farrell and Nick Evans exchanged a flurry of penalties before Saracens' Schalk Brits battled over the line for the only try of the first half.

Will Fraser finished off a superb Sarries break to extend his side's advantage in the second period.

And Quins were unable to produce a late score, despite Chris Ashton's yellow card for a high tackle.

Saracens have had the beating of their London rivals in recent years, having now won seven of their last eight Premiership encounters, and were superior once again as they strengthened their advantage over Leicester at the top of the table.

The home side, driven on by eye-catching performances from Fraser, Mako Vunipola and Alistair Hargreaves, are finding form in the build-up to the play-offs with four consecutive league victories.

But Quins, who are now eight points adrift in third place, look a shadow of the team that lifted last year's Premiership title and were unable to cope with a clinical Saracens outfit on the synthetic surface at Allianz Park.

We were dominant for most of the game apart from the last 10 minutes. There was a real fight for each other out there

The boot of England fly-half Farrell put the hosts in front, out-kicking his opposite number Evans four to two in the early stages.

And Saracens extended their lead when they took advantage of Joe Marler's yellow card to score the first try, created by a burst from Hargreaves and then Brits' subsequent persistence to wriggle over the line.

Farrell failed with his conversion attempt before Evans clipped a penalty between the posts to reduce the arrears to eight points going into the break.

Evans continued his consistency with the boot to add another three to the Harlequins tally, but it was the last time the visitors would get on the scoreboard.

Saracens took an insurmountable lead when Kelly Brown's drive pushed his side forward and allowed Farrell to deliver a delightful kick to the corner that Fraser touched down.

It was a joyous moment for flanker Fraser on the day he saw his brother Henry, who has been in a wheelchair since a swimming accident when he was 17, cut the ribbon to officially open Saracens' new home.

Farrell picked up the extras and added a further penalty to take Sarries 15 points clear.

Quins were handed a route back into the game late on when Ashton found himself in the sin bin for a high tackle on Maurie Fa'asavalu, but Mark McCall's men were resolute in defence and are now in a strong position to guarantee a home play-off semi-final.

"I thought we were very good today. We were dominant for most of the game apart from the last 10 minutes.

"At half-time 17-9 felt like a nervy score because there was a bit of a wind we had to play into in the second half and the score didn't seem to reflect the dominance we had.

"There was a real fight for each other out there."

"I'm very disappointed. We have no excuses in terms of the weather.

"We made too many errors and turned the ball over without really building any phases.

"Physically we were beaten, which is irritating beyond belief. We always pride ourselves on saying results don't matter but performances do - and we didn't perform today.

"We'll learn our lesson but the championship isn't decided today. They were worthy winners but we didn't perform anywhere close to what we know we are capable of."