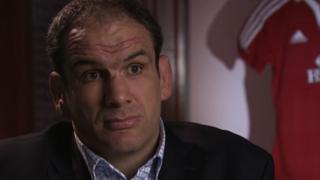 Former Lions captain Martin Johnson feels that without a standout candidate for captain that perhaps a "tour" captain is the best bet for the 2013 tour to Australia.

The likes of Alun Wyn Jones, Sam Warburton and Brian O'Driscoll have all been tipped for the role, but Johnson says the captain does not have to start every Test.

Johnson also plays down fears that if they do not win the tour that there is no future for the British and Irish Lions in the professional era.