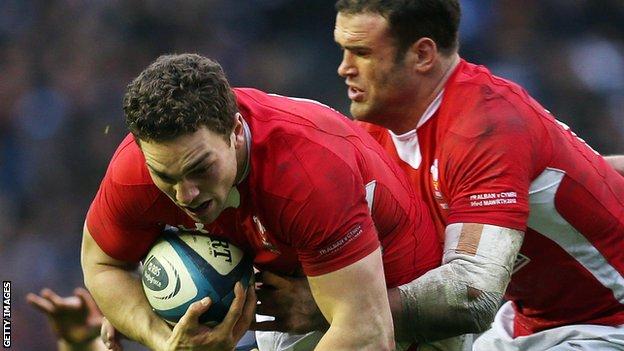 North's agent has revealed that Scarlets are in talks with the Saints.

"If we're going to be nurseries then we are almost throwing the towel in on the domestic front," he said.

"If we want to compete, let's do so. If we don't, let's say so and not lead anybody up the garden path."

North, 20, has a year left on his Scarlets contract and is not actively seeking a transfer, according to his agent.

But Christian Abt claims the region, who have refused to comment, have been talking to the Saints and "possibly a few other parties" about North's future.

He says the financial difficulties facing the Welsh regions are a factor in the North talks.

Scarlets, like the three other Welsh regions, are struggling financially and will be operating under a self-imposed £3.5m salary cap next season.

They recouped an undisclosed fee after allowing Ben Morgan to join Gloucester at the end of last season, and would expect to pocket a significant amount for North, who is rated as one of world rugby's most destructive wingers.

Should he move, North would join fellow Wales stars Jamie Roberts and Dan Lydiate in leaving the domestic game at the end of the season.

Alex Cuthbert has bucked the recent trend by extending his contract with Cardiff Blues, who have also tempted Gethin Jenkins back from Toulon.

But a steady trickle of Wales players have been lost in recent seasons, lured by the offer of significantly higher wages in England and France.

"Finances are obviously coming into play here, probably on both sides," added Davies, a former chief executive of Cardiff RFC.

"It's no secret that all the Welsh regions are struggling financially so if the Scarlets can secure a healthy return for [Saints] buying North's contract out, it's obviously of appeal to them.

"And of course in terms of George North securing his own future, if a club like Northampton comes in and doubles or triples his salary then he's obviously going to look after his own welfare.

"I don't think we can attribute blame on anybody - it's a commercial reality these days."

But Davies does fear that while Wales are flourishing on the international stage, having just clinched the Six Nations title for the fourth time in nine years, the domestic game is being left behind.

No Welsh team reached this season's quarter-finals of Europe's elite club competition, the Heineken Cup, and all four regions have called for greater financial support from the Welsh Rugby Union.

"We're almost saying as a nation that we can't or don't want to compete on the domestic front," said Davies.

"I find that quite sad. Welsh rugby should make a statement that we want to compete with the best in Europe.

"It's fine at Six Nations level - that's very important as we've seen in recent weeks - but there are still 30 other weekends in the season when I'm sure Welsh rugby supporters would love to see the Welsh regions competing with the top French and English clubs."