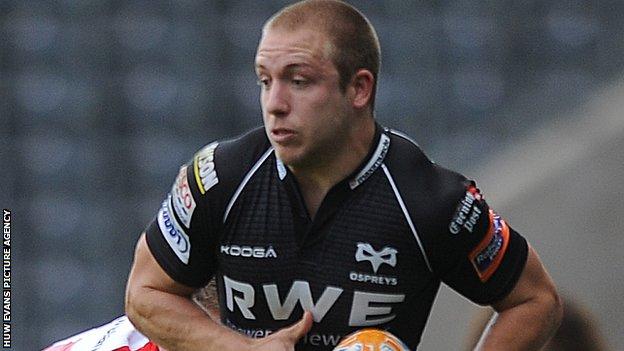 Ospreys utility back Tom Isaacs has signed a new two-year contract which will keep him at the Liberty Stadium until the end of the 2014-15 season.

Isaacs, a Wales age-grade cap and Sevens World Cup winner, joined the Ospreys in the summer 2009 and has past 50 appearances.

"I'm delighted to sign up for another two years" said Isaacs.

"I've had a good run this season, and that's something I've really enjoyed. There's a great set-up here."

Isaacs, 24, follows on from Duncan Jones,Rhys Webb and Joe Bearman in signing new contracts recently, while young forwards Lloyd Peers and James King did so at the end of December.

"Tom has done really well over the last 18 months. We've really seen him develop on and off the field," said Andy Lloyd, the Ospreys rugby operations manager.

"There's no getting away from his versatility, but he has been able to establish himself more and more as a 13 with some solid performances.

"He's capable of producing some really exciting moments, he can beat people and he's physical, which is a good place to start from. He's getting better and better, and we see Tom as a big part of our future.

"It's great news that Tom has committed himself to the Ospreys, becoming the latest player to sign a new contract for next season and beyond.

"Although the financial climate remains challenging, the steps that we have taken as a business to put us on a more stable, sustainable footing, means that we can look ahead to the future positively, with decisions being made for rugby reasons."