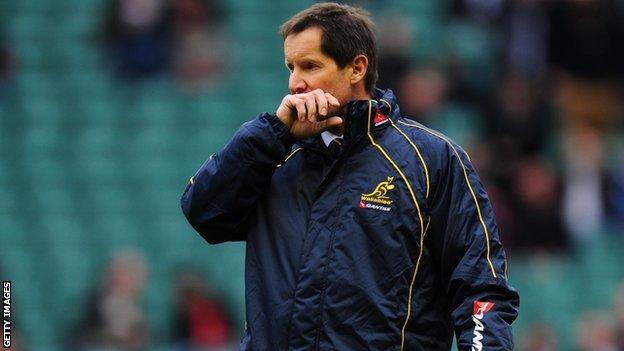 Robbie Deans said he is aware of the tough challenges his Australia side will face when the British and Irish Lions visit this summer.

The coach believes England's win over New Zealand last year and Wales' Six Nations victory over Stuart Lancaster's side proves it will be a stern test.

"We have a great respect for what is coming," Deans told BBC Radio 5 live.

"You only have to look at performance of England against the All Blacks and then Wales against England."

The Lions begin their tour against the Barbarians in Hong Kong on 1 June.

The Warren Gatland-led side then travel to Australia to face Western Force in the first of five tour games against provincial sides before their first Test against the Wallabies on 22 June.

"We have a deep respect for the capabilities of the playing group that is coming," added Deans.

"The Six Nations has been intensely contested, nobody came through unscathed. The last round determined the outcome. We saw in the intensity in that fixture between Wales and England what is coming."

The last time the Lions toured Australia was in 2001 and the Wallabies came out victorious following a deciding third Test in Sydney.

New Zealander Deans has been coach of Australia since 2007 and led the Wallabies in the 2011 Rugby World Cup, but believes facing the Lions will be the pinnacle of his coaching career.

Deans is also intrigued by how the Lions will adapt for the Tour and how many players from England, Wales, Scotland and Ireland will feature.

Gatland has also yet to decide on his captain, with former skipper Martin Johnson recommending Wales lock Alun Wyn Jones.

He said: "It probably is the pinnacle [of a coaching career] because of the nature of it.

Deans will get to work with his players for three weeks before the first Test, but they will not be allowed to play for their Super Rugby sides in the tour matches.

The Australia coach does not believe that is devaluing those games, but admits the Lions will have better preparations.

"The Lions get to play together, but we won't get that opportunity. We will try to replicate match as possible.

"It is not devaluing the tour matches, quite the opposite. It will ensure we get a preparation of sorts. We will make it effective as possible to make sure we enter into that first Test in as good as possible state."