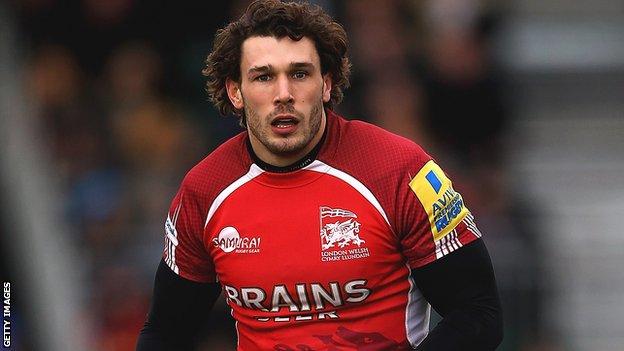 Versatile London Welsh back Tom Arscott will join Sale Sharks at the end of the 2012-13 Premiership season.

The 25-year-old, who can play on the wing or at full-back,

"He played in both games against us and I was very impressed with him. He will be a great asset," director of rugby Steve Diamond told the club website.

Meanwhile, Sale hooker Marc Jones has become the latest player to agree a new contract with the Sharks.

Jones, also 25, has appeared 13 times for the Sharks this season, including eight times in the Premiership.

"I'm pleased with the players we have in the squad. I trust everyone around me so I was more than happy to commit to the club," said Pontypridd-born Jones.

"Obviously it hasn't been the best season for me so far, as it has been plagued by injury and so it has not been the easiest of times.

"But going forward, I do see Sale bouncing back from where we are at the moment."

Rob Miller, Dan Braid, Dave Seymour and Will Cliff have all signed new contracts since the turn of the year, while Arscott - who has featured in all but one of London Welsh's league fixtures this season - has been confirmed as the club's first new arrival.

He will fill the void left by Charlie Amesbury, who