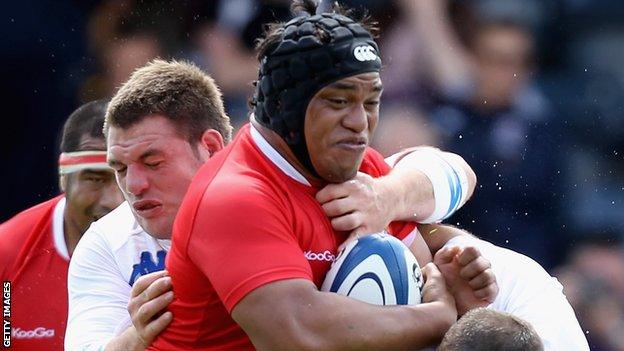 The 30-year-old has been with Glasgow since and has played 11 times for the Scottish side.

The 19-and-a-half-stone loose-head, who represented Tonga in last year's Pacific Nations Cup, also had a spell with Super Rugby side Waratahs.

"Ofa is a very powerful man and will be one of the strongest in our squad," said Worcester boss Richard Hill.

"We looked at a number of props and there were several loose-heads in the market and available," Hill added.

We quickly realised there was something special about him. He has that X-Factor

"However, when all the coaches sat down and looked at video, it was very clear that Ofa was the one who made us all stand up.

"We quickly realised there was something special about him. He has that X-Factor."

Fainga'anuku has also played against England Saxons and Italy A in the 2011 Churchill Cup, as well as being a former rugby league player.

"He is a big man but moves very quickly, a dynamic ball carrier and very good in defence which comes from his rugby league background," Hill said.

"Ofa has grown up playing rugby league so has soft hands and likes to pass out of the tackle, but he also has a huge work-rate and the ability to tackle and get back in the line quickly."

He added: "He has learnt very quickly from his spell in the RaboDirect Pro12 and impressed us in the set piece in games against Ulster, Cardiff Blues and Newport Gwent Dragons.

"He has been to Sixways to see what we are all about and is now very keen to join us. He has been playing at a very good standard in Glasgow, with the Warriors topping the RaboDirect Pro12, and he is an international, who wants to become a regular for his country."