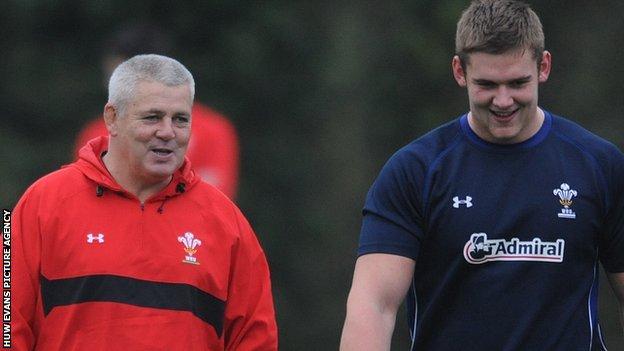 Former Wales captain Gwyn Jones fears Dan Lydiate's British and Irish Lions hopes could be harmed by a lack of quality games on returning from injury.

Flanker Lydiate is back from a broken ankle in Newport Gwent Dragons' Pro12 clash with the Ospreys on Friday.

But Jones says the could struggle to make the tour Australia amid intense rivalry.

"He's not really going to have the quality of games... to impress the selectors," said ex-open-side Jones.

Wales subsequently went on to complete eight successive defeats and a record five home losses on the trot.

But interim Wales coach Rob Howley oversaw a turnaround in fortunes that culminated in Wales beating England 30-3 to retain the Six Nations title in Cardiff.

Sam Warburton successfully switched from open to blind-side while Justin Tipuric occupied the seven jersey against England to earn the Man-of-the-Match award.

If he's up there [in terms of fitness], he's got a chance because in Gatland's teams defence is all important

Jones says that leaves blind-side Lydiate with an unenviable task, made more difficult by the versatile nature of several rivals among the Home Nations.

"Despite that I'm sure he'll [Lydiate] be very keen to prove his importance in a defensive effort and to make his mark on the Lions selectors.

"Unfortunately, he's not really going to have the quality of games likely to be able to impress, unless he's particularly outstanding.

"But they know him well and they know what he can do.

"It's going to be difficult because there's lots of good number sixes around.

"Most people are playing number six and number seven.

"All of those guys are arguably sixes, not sevens.

"That makes him [Lydiate] a little bit exposed if you take a number six as a little bit of a punt, which you are in Dan Lydiate, because he hasn't played.

"And you want to see him playing in a big match, high intensity, Heineken Cup quarter-final to see if he's up to speed because he's been out for so long."

The Dragons cannot offer Lydiate such a stage on which to press his case.

After the Ospreys, Wales' Pro12 strugglers face only the Scarlets, Ulster, Munster and Edinburgh in the same competition.

However, Jones says if Lydiate, who has built his reputation on outstanding defence, can prove he is at peak fitness by the time Lions coach Warren Gatland names his squad in late April, the player may be in with a chance.

"If he's up there [in terms of fitness], he's got a chance because in Gatland's teams defence is all important," said Jones.