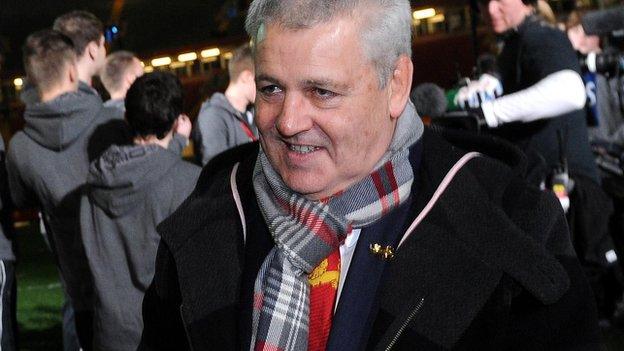 British and Irish Lions coach Warren Gatland says the Six Nations decider between Wales and England was ideal preparation for the tour to Australia.

Gatland believed the quality of rugby dropped at times during the tournament.

However, that changed with Wales' dramatic 30-3 win in the final game.

"We couldn't have asked for any more for the finale with one team playing for the Grand Slam and the other team still in with a chance of winning the championship," said Gatland, 49.

"That set it up for us with a good level of intensity and physicality.

"We felt there was a little bit of a fall-off in the quality of some of the games but not in terms of the character and guts that were shown."

Gatland added that experienced players like Paul O'Connell, Dan Lydiate and Tommy Bowe, who all missed the championship through injury, remain in contention for the summer tour.

His final squad will be announced on 30 April after he refused to bow to pressure to name it a week earlier because of crucial Heineken Cup and Amlin Cup matches.

"We came under a bit of pressure to name the squad a week earlier from the suppliers who have to get a lot of the gear out, get the players suits done and stuff," Gatland said.

"But that is a week that could potentially be significant where there is a lot up for grabs and it gives players who may have been injured more opportunity to come back."