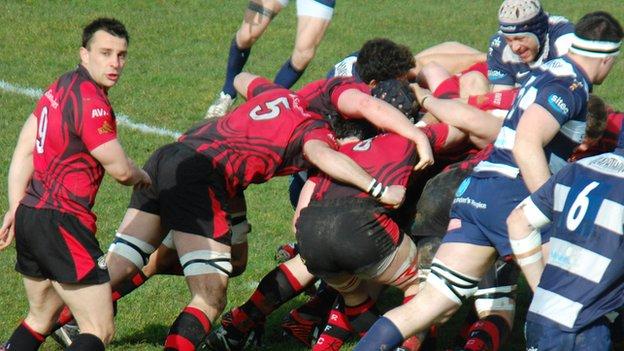 Bristol took the lead for the first time in the 79th minute as they snatched a dramatic victory at Jersey.

Home scrum-half Nicky Griffiths went over with the last play of the first-half to help the islanders to a 16-9 lead at the break.

Guy Thompson's try looked like it might secure a vital win for the hosts, but Bristol hit back through Fautua Otto.

Relegation-threatened Jersey gave the visitors a final scare though, claiming a touchdown of their own deep into stoppage-time only for referee Ross Campbell to rule that the ball had not been grounded.

After consulting with his touch judge, Campbell blew the final whistle, much to the relief of Andy Robinson who was taking charge of Bristol for the first time since

We deserved to win it and we should've won it

The game was certainly not a stroll in the park for the visitors, who moved back into fourth spot in the Championship table.

Jersey were ahead as early as the third minute through a Michael Le Bourgeois penalty and maintained a three-point advantage for much of the half before skipper Griffiths scored the opening try after good work from Le Bourgeois.

The impressive Jarvis reduced the deficit to just a single point with two penalties, but a try from Jersey back-rower Thompson re-opened the lead.

A win for the islanders might have been enough for them to start to wonder if they had done enough for Championship survival with three matches to spare, but Bristol had other ideas and centre Otto's try, followed by Jarvis's late score wrapped up the win.

"Credit to Bristol, they came back pretty well, but I thought that our lads deserved a lot more than just one point out of that game.

"I'm just gutted and very disappointed that we've not won that game because we deserved to win it and we should've won it."

Jersey took a losing point from the match which moved them seven ahead of bottom club Doncaster, whose fixture against Bedford was postponed.