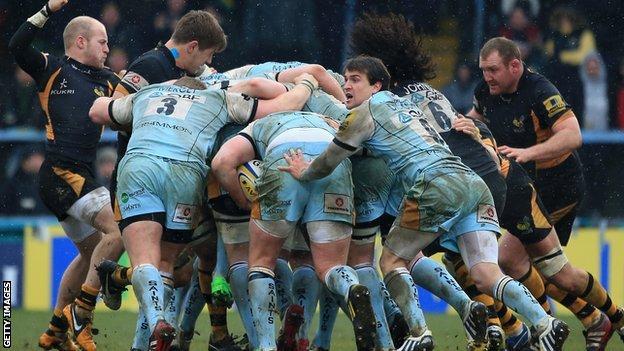 Northampton Saints hooker Dylan Hartley has said his side will need a different approach from their win against Wasps if they are to beat Leicester.

Saints relied on a dominant driving maul in Saturday's narrow

"Away from home the driving maul has been good for us. It worked on this occasion but next week it might not," Hartley told BBC Radio Northampton.

"So we're going to have to look for something different against Leicester."

All four of Northampton's tries in their bonus-point success at the weekend were created through the power of the Saints pack.

But it is a tactic that may be less effective when they host east midlands rivals Leicester on Saturday.

"But knowing Leicester, and how they pride themselves in that area, they won't back down too easy.

"Hopefully it will be more of an all-around performance next week."

The win over Wasps, courtesy of a last-gasp conversion, was the fifth time this season that fourth-placed Saints have won an Aviva Premiership game by the equivalent of one try.

But it was their fourth successive victory and created a four-point gap between themselves and Gloucester in fifth.

"Against top teams it is often a one-score game and often that score comes in the last 10 minutes," said centre Dominic Waldouck.

"So it's important we can produce those moments in the dying minutes. It's pleasing that we have done that a few times recently.

"Obviously it would be nicer if we could wrap up the game earlier."