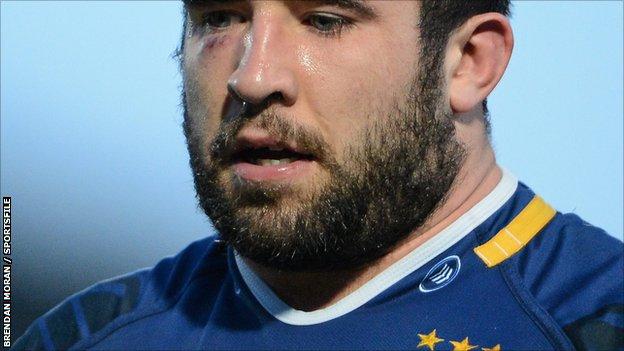 London Irish have announced the signing of 25-year-old prop Jamie Hagan from Leinster on a three-year deal.

Hagan spent six years with the Irish side and scored his first try in a 42-13 win over Ulster in December 2011.

Director of rugby Brian Smith said: "Jamie is a future Irish Test player and is more than ready to launch his Premiership career.

"He's a tough, uncompromising prop coming into his prime and he'll add more steel to our tight five."

I look forward to joining London Irish next season and getting stuck in to Premiership rugby.

Smith added: "Jamie's rugby talent and Irish heritage make him a perfect fit for the club.

"I'm genuinely delighted that he's committed to London Irish for the next three seasons."

Hagan, who was part of the Ireland team that captured the Under-20 Grand Slam in 2007, said he was looking forward to moving to England.

"London Irish are a team with a rich heritage and proud Irish traditions which will really suit me," he said.

"I would like to thank Leinster for all they have done for me and wish them well for the future.

"I look forward to joining London Irish next season and getting stuck in to Premiership rugby."

Hagan is the third addition to Brian Smith's squad this month after Irish announced the signings of Blair Cowan from Worcester and Scarlets wing Andrew Fenby.