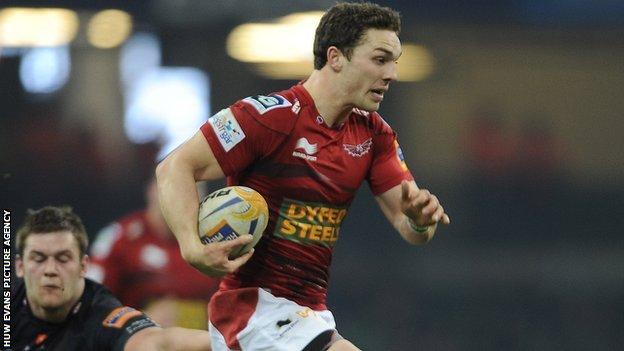 The Scarlets kicked off Welsh rugby's Pro12 Judgement Day at the Millennium Stadium with victory in an entertaining and full-blooded encounter against Newport Gwent Dragons.

But the Scarlets were denied a bonus point try by the gutsy Dragons.

The win sent the Scarlets above Welsh rivals the Ospreys in the battle for a top-four play-off spot with the Ospreys having an immediate opportunity to take advantage in their 17:15 GMT kick-off at the same venue against Cardiff Blues.

The Scarlets topped a 79% possession share in the opening period as their edge at the scrum and in attack held sway.

But the scoreboard told a different tale when the opening period was over with the teams tied at 10-10.

With the Dragons having suffered a 52-19 drubbing by the Ospreys in the previous round, there was perhaps an air of over-confidence about the Scarlets in the opening stages.

Evidence of that came when they responded to an early penalty award by kicking for the corner and an attacking, close-range line-out instead of attempting a shot at goal.

The Scarlets' self belief seemed understandable when their off-loading approach brought North's try.

Williams had already opened the scoring with a 20th minute penalty and he added the conversion to the wing's try.

And the absence of North's Wales team-mate Toby Faletau, who was in the sin-bin for collapsing a maul, ensured there was a gap in the Dragons' defensive formation.

However, the Scarlets had not made enough of their dominance of territory and possession.

And after Dragons scrum-half Jonathan Evans illegally impeded opposite number Davies at a scrum, Scarlets fly-half Williams' penalty attempt rebounded off an upright.

The Dragons then took advantage of some loose play and poor option taking by the Scarlets to strike back.

Scrum-half Evans was alive to the opportunity, dummying past prop Phil John on the Scarlets 22 and racing over for Prydie to convert.

Prydie, the youngest Test cap in Welsh history, then levelled the scores after Scott Williams' illegal work at a ruck to leave the Scarlets wondering how they were not well ahead at the break.

Owen Williams and Prydie exchanged penalties after the break to maintain the deadlock before the Scarlets' fly-half edged them back in front.

The Scarlets pivot hit an upright for the second time in the 65th minute to leave the outcome finely balanced.

But tries in quick succession by Jonathan Davies and North put paid to the Dragons' spirited effort.

And from the restart Davies launched the attack that ended with North's second try following Gareth Owen and Ken Owens' impressive link work.

The Dragons were not done, however, as impressive former Scarlet Daniel Evans - having been switched from full-back to fly-half - used his power to ride Owens' tackle and score.

But he and his team-mates were left to ponder defeat and the Scarlets their missed opportunities in the hunt for a bonus point.