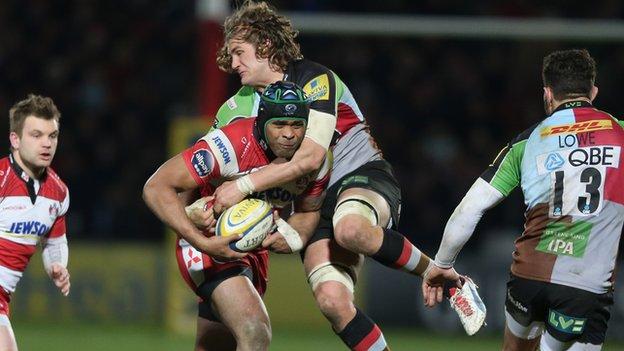 Gloucester had to come from behind as they narrowly beat Premiership champions Harlequins at Kingsholm.

Quins led 12-3 at the break, Freddie Burns responding with a penalty to Rob Buchanan's early unconverted try, before Sam Smith scored a second Quins try, this one improved by Nick Evans.

But Jonny May scored straight after the restart, Burns adding the extras.

After an Evans penalty made it 15-10, Qera went over to level the scores late on before Burns' boot earned victory.

Qera was one of five changes to the Gloucester team, along with fellow flanker Tom Savage, lock forward Lua Lokotui, centre Henry Trinder and hooker Koree Britton, who was given his first Premiership start.

Not so mighty Quins

LV=Cup winners Quins had a try disallowed for a knock-on just before half-time, which would have taken them 19-3 in front.

But, instead, Gloucester knew they had to strike first after the break, and they duly delivered inside three minutes through a spectacular score by May.

When a Quins attack broke down deep inside Gloucester territory, their first instinct was to run it back, with Charlie Sharples skating around his opposite number Smith before quickly recycled possession resulted in May crossing on the other wing.

Burns landed the conversion, making it 12-10 and, although Evans booted a penalty for Quins, the visitors were reduced to 14 men when replacement hooker Joe Gray was sinbinned just 14 minutes after coming on. And the extra scrum pressure exerted ultimately resulted in Qera powering over 10 minutes from time.

That meant a third straight league defeat for Quins (for the first time since Conor O'Shea took charge three years ago) and they will drop to fourth in the table if Northampton beat Leicester at Franklin's Gardens on Saturday.

"It is an important result in terms of our season and our challenge, not only from the performance and the result, but the springboard it might allow us for our remaining games.

"If we hit our straps, who knows? We will take each game as it comes. There is a lot of hard rugby to be played.

"I was delighted with the style and ambition we showed, and more than anything the work-rate of the players.

"The way we moved the ball, the fluency in our attack for large periods of the game and the intent was remarkable. The boys worked so hard for each other."

"It was a try, which would have made it 19-3. But that's life and you don't want to be talking about that after watching what was a cracking game of rugby.

"I am devastated for the players. "Both teams were magnificent in the way they went about the game, with massive ambition.

"It was like two heavyweight boxers slugging it out, and that's the way to me that you want rugby played.

"If we play like that for the rest of the season, I don't think there are many teams who will want to play us."