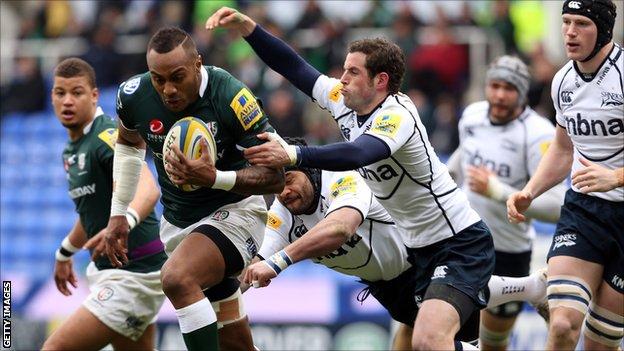 Nick Macleod kicked a last-minute penalty to earn Sale what could be a vital draw and four-try bonus point against fellow strugglers London Irish.

Sale led at the break after tries from Henry Thomas, Mark Cueto and Kernan Myall cancelling out efforts from Guy Armitage and Halani Aulika.

Sale of the season

Irish have 30 points while Sale are on 26 with London Welsh bottom on 18.

The Exiles made the brighter start with Armitage bundling over from close range following a typically powerful burst through the Sale midfield by Sailosi Tagicakibau.

Homer sent over the conversion but the hosts were pegged back by the boot Macleod who got Sale up and running with a penalty.

But Irish stretched their lead after Aulika picked the ball up off the back of a ruck from 22 yards before brushing off a weak Sale tackle to cross for his fourth try of the season.

Homer added his second conversion but Sale responded with Thomas bundling over in the corner after a well-worked Sale line out exposed the Irish defence.

Macleod sent over the conversion and they soon led with Cueto going over in the corner for his 77th Premiership try after a flowing three-quarter move from the visitors.

Two quick-fire penalties from Homer made it 20-15 to Irish but on the stroke of half-time Myall went over in the corner after a kick and chase saw the ball eventually make its way out to the wing.

And Macleod's conversion meant for this first time this season Sale led a Premiership game at the break.

Macleod kicked a penalty after the break to stretch their lead and shortly after, Gaskell finished off a Sale break to cross for their fourth try to also earn a bonus point.

Lahiff then bundled over for his first try in 45 matches and first for London Irish with Homer kicking the conversion and adding a penalty to level the scores at 30-30.

Irish got their noses in front following a further Homer penalty after a high tackle on Marland Yarde but with a minute left Macleod restored parity with a penalty to earn a draw for Sale.

London Irish director of rugby Brian Smith: "We are disappointed. We got such a handy lead to begin with and then we sat back and admired our good work.

"We showed good fighting qualities to come back from that but it is embarrassing to score two tries and go to sleep.

"We did some good things, but defensively we were a shambles and that's very disappointing as last week against Worcester we could have played for three hours and not conceded."

Sale director of rugby Steve Diamond: "I am very happy.

"We know London Welsh are a good team and with 10 minutes to go yesterday, they were close to Bath.

"But we can't worry about what other people do, we will try and win every game we have left.

"We have been good at home, we have had a great result getting three points away from home here, and we will take having Gloucester and Wasps in our last two games."