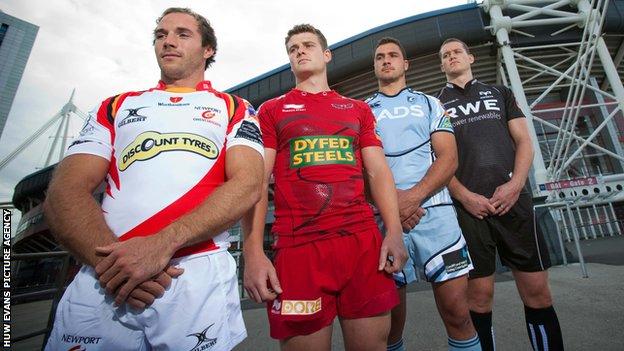 Welsh rugby's first Pro12 double-header at the Millennium Stadium has been described as "a fantastic concept" by Dragons coach Darren Edwards.

The Newport Gwent Dragons and the Scarlets will launch Saturday's action, followed by Cardiff Blues facing the Ospreys.

The Welsh Rugby Union claims it has sold more than 30,000 tickets for the event billed as 'Judgement Day'.

"I think it is a fantastic concept," Edwards said.

"I was fortunate enough to play for London Irish in the first London double-header [in the English Premiership], and every year it has grown.

"Coming to the Millennium Stadium, with the roof closed and lots of spectators, it should be a great occasion we can all embrace and enjoy."

The majority of Wales' Six Nations title-winning stars back will be on show just a fortnight after the record-breaking 30-3 victory over England secured silverware and denied Stuart Lancaster's side a first Grand Slam since 2003.

Both Welsh derbies will included players who are genuine candidates for coach Warren Gatland's British and Irish Lions squad to tour Australia in the summer.

Centre Jonathan Davies of the Scarlets will make his 100th appearance for his region, alongside wing George North.

Centre Jamie Roberts, wing Alex Cuthbert and full-back Leigh Halfpenny are all expected to feature for the Blues in their clash with the Ospreys.

Fly-half Dan Biggar, prop Adam Jones, hooker Richard Hibbard and locks Alun Wyn Jones and Ian Evans are all expected to be in the Ospreys line-up.

Among several intriguing head-to-head contests is the battle between rival open-side flankers - but Wales back-row colleagues - Sam Warburton and the Ospreys' Justin Tipuric.

"This is a big occasion, one that we are looking forward to," Blues director of rugby Phil Davies said.

"We will be playing at an iconic venue and trying to keep the feel-good factor of Welsh rugby going."

Wales flanker Dan Lydiate is expected to continue his comeback on Saturday from a serious ankle injury that sidelined him for almost six months.

Flanker Lydiate featured against the Ospreys last Friday and a run of late-season appearances could put the Wales star in contention for the Lions tour.