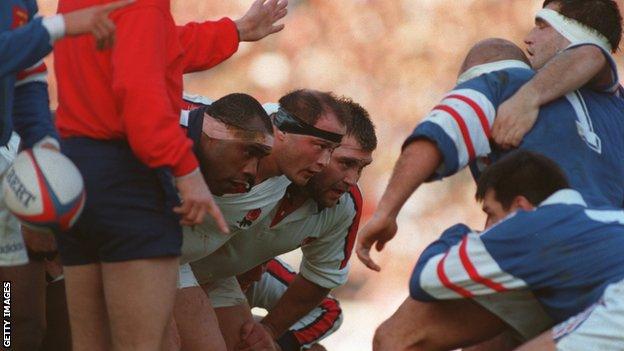 BBC rugby union pundit Brian Moore is a former hooker for England and the British and Irish Lions. He is also a qualified referee and has been growing increasingly exasperated with handling of the scrum at the highest level. He explains why these problems are spoiling the game and offers some solutions:

"Something has gone very wrong with the scrum.

Instead of being a means of restarting the game it has become a way of winning penalties. The hooker - my old position - has generally become bigger, because he is required to have power rather than hooking skills.

The important elements of scrummaging - engagement, binding of the front rows and feeding of the ball - have been truncated into a split second.

This means referees cannot watch all parts of the scrum and players know that if they get one element wrong, they are in a disadvantageous position and are likely to get pushed backwards. As a result, they collapse the scrum knowing the referee is unlikely to know who is responsible and is as likely to blame one pack as the other.

The scrum should be a means of restarting the game safely, quickly and fairly

To be frank, the whole edifice has become a grotesque farce and is blighting the game.

Not only has the scrum become tedious, but it is dangerous - and the International Rugby Board knows it. Paying customers are rightly registering their disapproval and asking where the value for money is in watching the game.

Will the IRB listen? We will have to wait and see, but if they don't, they had better get ready for a major lawsuit because the first injured player in an international match will take them to the cleaners.

The scrum, according to rugby's laws, is a means of restarting the game safely, quickly and fairly. In order to do that, there are specific laws about what you can do and when, which are relatively long-standing.

The job of the hooker is to hook the ball back when it enters the scrum, consisting of 16 large men spending too much time wrapped in each other's arms. When the rules are applied properly, they work. And although they don't stop things going wrong, like a scrum collapsing or wheeling, they stop as many as can reasonably be expected in a competitive and technically-difficult environment.

The two packs are meant to form either side of a mark and engage, which means the front rows binding on their opposite numbers. When the scrum is square and stationary, the ball is fed in straight by the scrum-half along the line between the two front rows. The hooker hooks the ball back into his side of the scrum where it emerges and can be used in open play.

A pack that is not putting the ball in can still compete for it by their hooker striking for it when it is fed in, or they can shove the opposition off the ball. But, crucially, this can happen only when the ball has been fed and not before.

The working of these laws means the roles in the scrum of hooker, prop and so on are distinct, and require different physical attributes. This allows rugby's unique claims to flourish. It is a game for all shapes and sizes. The fat boys can be props, the tall ones second rows and the diminutive malevolent ones hookers.

Simple? Well it should be. So let me go back and explain why things first started to go wrong with the scrum.

Around 1996, the birth of professionalism, the All Blacks, who have always led the rugby world in new techniques, adopted a scrummaging technique that involved their pack timing a push to coincide with the strike of their hooker.

This way they not only got the hooked ball, they also had an advancing scrum that put them at a distinct advantage as their opponents had to retreat to stay onside.

As is the nature of sport, this did not go unnoticed, and fairly soon all packs at elite international level were adopting the same technique. Gradually referees stopped enforcing the law requiring the ball to be fed in straight, and scrum halves started to feed the ball further and further into their side of the scrum.

The opposition hooker stopped striking for the ball because there was no realistic chance of succeeding, and his efforts would be transferred into adding to the power of his pack's drive. Over time, the scrum became not a hooking and pushing contest but one of power pushing, with each pack trying to push as early as the referee would allow. According to the laws of the game, this was not supposed to happen until the ball had been fed.

The increasing focus on power led to more and more scrums collapsing and the IRB decided it had to do something to control scrum engagement. Thus, instead of leaving the front rows to engage in their own time and under their own auspices, they introduced a sequence which controlled the engagement.

In its various incarnations it was "touch, crouch, hold, engage". This did not work, which came as no surprise to people like me who have played in the front row. In fact, it made matters worse by effectively becoming a signal for the front rows to engage with as much force as possible.

Then, for reasons known only to themselves, elite referees abandoned altogether the law against early shoving.

Unfortunately, the IRB and elite referees have failed to understand that it is what happens after, and not before, engagement that matters. That is where the source of the current problems lie.

Ironically, the solution is the simple application of the existing laws. And the proof is where the laws are properly applied - at junior level - where they do not have these serious problems with the scrum."