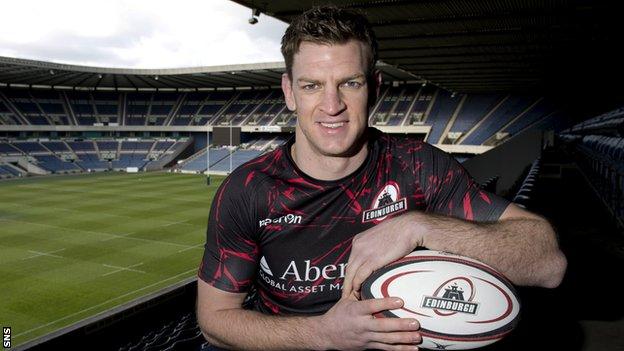 Worcester and Scotland winger Nikki Walker has signed for Edinburgh.

Walker, who moved to Sixways from the Ospreys last year, will be released from his contract and move in the summer.

The 31-year-old scored four tries during his 13 appearances for the Aviva Premiership outfit.

I still have a strong desire to represent my country

"I have enjoyed my time in Worcester but an opportunity has arisen for my family and I to return home," he said.

Walker said he was keen to add to his 24 Scotland caps when he returns north of the Border.

"Being passionate Scots, my family are delighted that we're moving home to Scotland where I still have a strong desire to represent my country, something I can achieve by earning selection and performing for Edinburgh Rugby," he said.

"Personally, as a winger, I'm looking forward to joining up with some of the championship's most dangerous play-makers and finishers. I can't wait for next season to start."

"Nikki has an established try-scoring pedigree and brings a wealth of experience, having consistently delivered top class performances throughout his club and international career," he said.

"It was fantastic to see him back in action for Scotland A recently and I believe that we'll see the best of him at Murrayfield next season."

"I would like to take this opportunity to thank Nikki for his efforts during his time with the Warriors and wish him every success in the future," he added.

"His move to Edinburgh should help his ambitions to play for his country once again and he will leave us at the end of the season with our best wishes."