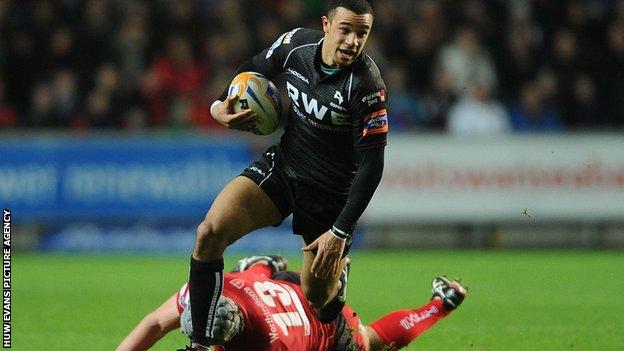 Ospreys Wing Eli Walker will miss the rest of the season after undergoing surgery on Tuesday afternoon.

The 20-year-old hasn't featured since sustaining a back injury while with the Wales squad during the Six Nations campaign.

Walker is now expected to miss the Wales summer tour to Japan.

"So having taking expert advice he underwent an operation to correct the problem on Tuesday. Experience of dealing with similar issues suggests that he will be out of action for around 10 to 12 weeks."

Walker had impressed during the early part of the season with the Ospreys, replacing Shane Williams in the famous number 11 jersey at the Liberty Stadium.

He was called up into the Wales squad after he scored five tries in 13 appearances, catching the eye in particular with a superb solo effort in a Heineken Cup win over Toulouse in December.

The Wales Under-20 international also produced a weaving run set up a late try as Ospreys clawed their way back to a 15-15 draw with Leicester in January.

"Eli will be out for the season and his summer will also be compromised," said Ospreys backs coach Gruff Rees.

"Our focus is just to get him back for pre-season and it's highly unlikely he will tour with Wales. Eli has aspirations but we have to think of the long term and getting him fit and well again, because we need him in September.

"We just want to get him back for our pre-season programme."