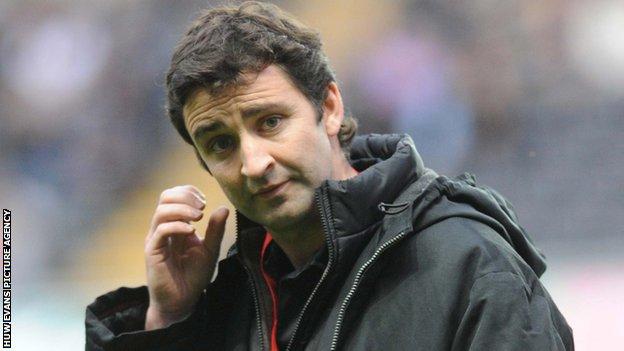 Ospreys boss Andrew Hore has accused the Welsh Rugby Union of not encouraging the region to forge better relationships with local clubs.

"They [WRU] feel it is their domain and not one for regional rugby, which is European rugby and the Pro12," said Hore.

The WRU says it has a structure in place to develop the game in Wales.

But Hore wants his region to have a greater role in that structure, which he believes would allow them to develop players and attract bigger crowds to their games.

He claims to have been "told repeatedly" by the WRU that they should not be involved with "in the community game".

"To me, it's a sad state of affairs because fundamentally we should all be trying to promote the game," said Hore.

"We should be trying to get bums on seats because I am sick and tired of hearing that we should go running to the WRU for finance."

The WRU says its structure to develop the game from schools to semi-professional Premiership clubs allows the four regions to "focus on creating winning teams".

This "pyramid of progression" has been supported by funds in excess of £27m over the past five years, according to the WRU.

"With the WRU structures in place the development pathways lead straight into the regional squads which can then nurture talent for Wales," the WRU said in a statement.

Hore was speaking to BBC Wales Sport after Ospreys re-signed fly-half Dan Biggar to keep him at the Liberty Stadium for a further three years.

The Welsh regions and the WRU have talked about the financial plight of the professional game for over a year but there has been no agreement or proposals to take the game forward as yet.

Biggar, who turned down a chance to go to France to stay with the Pro12 champions, and full-back Richard Fussell and prop Duncan Jones have all signed new deals to stay with the Ospreys and in Wales.

But leading Wales internationals are continuing to leave Wales, attracted by higher wages in France and England.

There have been calls for the WRU to give the Welsh regions more funding to help retain Wales internationals.

Hore admits any extra funding would be welcome but stressed any extra resources would not mean money being spent only on players or on luring big-names to the Liberty Stadium.

"If there was extra money coming in from the WRU, I would be looking to engage more with the community and to ensure they felt a significant bond with the Ospreys," he said.

"That's where the season structure needs to change. So there is not this constant conflict between ourselves, our Premiership clubs and our junior clubs.

"It's a shambles and we need to get our stuff together or we die."