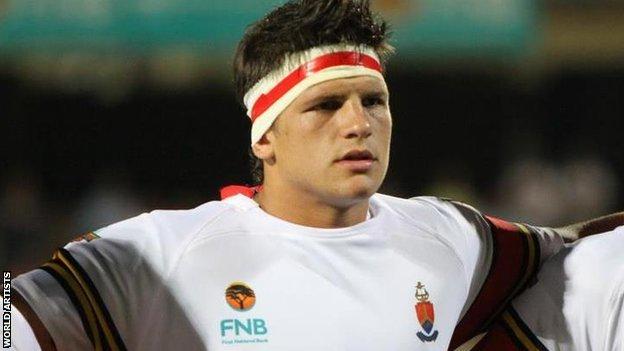 The English-qualified lock forward, who can also play at flanker, is due to arrive at Sixways in July.

The 21-year-old becomes the third new Warriors pack signing for the 2013-14 season in little over a week.

The signing of Cornish Pirates' Paul Andrew was followed by the announcement of another new prop, Glasgow's Tongan international Ofa Fainga'anuku.

Bulawayo-born Williams, who has an English grandfather, is eager to get started at Sixways.

"I am impressed with Worcester," Williams told supersport.com.

"They own their own stadium and are becoming more competitive in a very strong premier rugby competition. I feel I can get some game time in their first XV.

"The conditions are a bit slower and that should suit me because I mainly play lock in South Africa but should be able to play blindside flank as well."

Worcester head coach Richard Hill added: "Mike is primarily a lock who has the ability to play at six and is a young player who excites us.

"He is an athletic and big man, who is also English qualified, and was keen to make an impression in this country when he came to visit us earlier this month.

"Mike has been part of a strong rugby set-up in South Africa and has real potential to get even better."

While Worcester step up the strengthening of their squad for next season, having also signed stand-offs Ignacio Mieres and Paul Warwick and Argentinian duo Leonardo Senatore and Agustin Creevy, they have also this week lost Scotland international Nikki Walker, who is to return north of the border with Edinburgh.

In addition, stand-off Andy Goode, utility back Joe Carlisle and prop Matt Mullan are all joining Wasps, flanker Matt Kvesic is Gloucester-bound and Blair Cowan is leaving for London Irish.