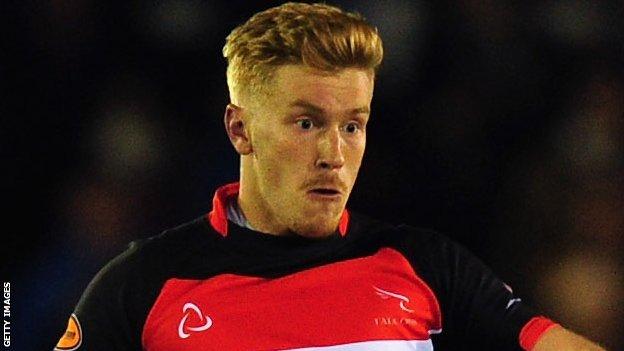 Falcons were made to work hard for their victory and Max Stelling went over for the islanders early on.

The hosts hit back through Tom Catterick and Joel Hodgson added another try after the break.

But Joe Buckle touched down to keep Jersey in contention, before tries from Noah Cato, Ollie Stedman and Adam Powell secured Newcastle's win.

The result maintains Newcastle's 100% league record but for long periods of the game the visitors would have felt they had a chance of pulling off one of their greatest ever wins.

Full-back Stelling's try in the corner after 10 minutes came against the run of play and was Jersey's first real attacking move of the game.

Newcastle had much of the possession and after a successful Hodgson penalty Catterick showed his pace out wide to evade the defensive line and put his side ahead.

The islanders, in their first ever season in the second tier of English rugby, pressurised the try-line on the stroke of half-time.

After a series of reset scrums and a yellow card for Falcons prop Kieran Brookes, they thought they had gone over to retake the lead only for Italian referee Marius Mitrea to rule the ball had not been grounded.

Moments after the restart Jersey centre Mark McCrea was involved in a nasty looking collision on the half-way line. After a long stoppage the former Connacht man was carried off with a suspected broken leg.

Jersey's mood was not improved when, soon after, Hodgson's try put the hosts eight points clear, but then Buckle crossed to score beneath the posts and keep his side in touch following good work from McCrea's replacement David Bishop.

With just one point in it, at 13-12, the islanders were dreaming of a surprise win but got a wake-up call as Cato sprinted through to score an interception try and halt any momentum the Channel Islanders had begun to build.

The Falcons seized the moment and late tries from Stedman and debutant Powell put a gloss on the scoreline which did not reflect how close the encounter had been for much of the game.

"I thought for both our tries we attacked brilliantly," said an upbeat Jersey boss Ben Harvey, despite seeing his side take no points from the trip to the north east.

"The crowd came along and were thoroughly entertained by us.

"Our boys did a great job and I was very proud of them."

The result, coupled with bottom club Doncaster's losing bonus-point against Nottingham, means the islanders are now six points off the foot of the Championship table and have played a match more than the Knights.

Jersey face Doncaster at St Peter on 13 April in a clash which is likely to go a long way towards deciding which side beats the drop to National League One.