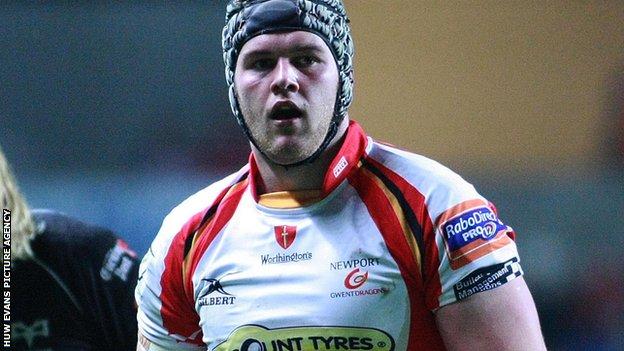 Dan Lydiate fears Newport Gwent Dragons could lose by 50 points if they do not perform against the Scarlets in Saturday's 'Judgement Day' opener.

The Dragons go into the game after losing 52-19 to Ospreys last Friday.

Lydiate returned from a six-month ankle injury lay-off to play in the first half of that match.

"If we don't turn up on the weekend we could be looking at 50 points again," Lydiate told the BBC Sport Wales programme.

"Our performances have not been good enough.

"We had a massive loss against the Ospreys. Make no bones about it - it wasn't good enough.

I haven't signed anywhere yet... You will just have to watch this space. I'm just happy to be back on the paddock

"On a personal note I was just happy to get back in that environment and playing again, getting 40 minutes under my belt.

"But as a team we didn't perform.

"The Scarlets have got a really good team. So if we don't turn up on the weekend we could be looking at 50 points again.

"So we have to make sure our heads are on again."

The Ospreys, who crossed for seven tries at the Liberty Stadium, were not the first side to give the Dragons a drubbing in the 2012-13 season.

In February the Dragons went down 60-3 at home to Glasgow.

Lydiate is set to leave Rodney Parade at the end of the season and is expected to join a club in France.

But Lydiate claims he has yet to put pen to paper.

"I haven't signed anywhere yet... You will just have to watch this space," he said.

"I'm just happy to be back on the paddock."

The 2012 Six Nations Player of the Tournament had been sidelined for six months after he dislocated his ankle against Edinburgh in the autumn.

But with three regional games remaining Dragons coach Darren Edwards believes 25-year-old Lydiate still has time to make it onto the British & Irish Lions tour to Australia in June.