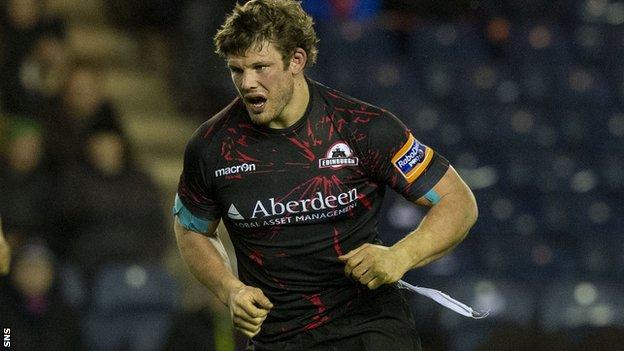 Edinburgh's upturn in fortunes continued as they emerged from Zebre's Stadio XXV Aprile with a narrow win.

But Zebre number eight Dries van Schalwyk crossed the try line and Luciano Orquera added the conversion to make it 7-3 to the Pro12 basement side.

Laidlaw kicked two more penalties to put Edinburgh in front but Zebre could have snatched it at the end with a drop-goal that hit the woodwork.

Edinburgh arrived in Italy on Wednesday so as to be fresh for the match, looking to build on last week's 14-8 win over Ulster, which was only their fifth Pro12 win of the season.

And that looked to have paid off when Edinburgh started brightly, with Laidlaw's penalty from a central position breaking the deadlock after five minutes.

Laidlaw had returned to the fray from Scotland duty along with Ross Ford, Tim Visser and Matt Scott.

Soon, though, Edinburgh became bogged down in the quagmire, as players continually lost their footing and neither side took a grip on the game.

Ben Atiga made an inspiring 50-yard break in the 26th minute but his little reverse pass was dropped by Netani Talei and the Scots conceded a penalty at the breakdown.

Zebre moved in front when rampaging number eight van Schalwyk collected a clever pop pass and surged through the red and black back line for the only try of the match. Orquero added the extras.

Edinburgh reduced the deficit just before the break when Laidlaw opted to kick for points when awarded a penalty.

Then, at the beginning of the second period, the Scotland star took advantage of an offside decision to boot Edinburgh 9-7 in front.

Interim coaches Stevie Scott and Duncan Hodge had clearly been working on the driving maul to push the Italians back and the effect was to win another penalty.

However, Laidlaw pulled his kick wide of the uprights from out on the left and the little Borderer's luck seemed to be running out when, on the hour mark, he slipped five metres from the try line with ball in hand.

Moments before, and signalling that the Edinburgh were on top, Ford in his 100th start for the club and then Scott made promising breaks within the Zebre 22 but were repelled.

Greig Tonks went closer, however, and did manage to cross the try line and touch down, but the score was prevented by an Italian player getting his midriff between ball and turf.

With seven minutes remaining Laidlaw missed his second penalty out of five, a lengthy kick that spun wide after Edinburgh had been awarded the chance for Zebre being offside at a kick-chase.

As a dour match drew to a close, Edinburgh enjoyed a large slice of luck when an attempted drop-goal rebounded off the junction of post and crossbar.