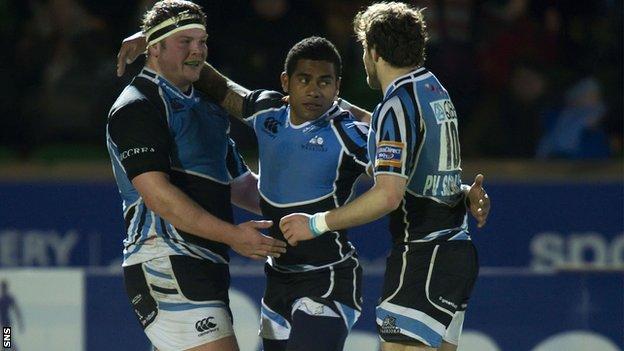 Six-try Glasgow went top of the Pro12 with a comfortable but hard-earned win over Munster at Scotstoun.

Howlett got another for Munster but John Barclay intercepted and went over to ensure Glasgow ended on a high note.

Gregor Townsend's Glasgow outfit now go four points clear of Leinster, who play Ulster on Saturday, at the top of the Pro12 table.

And much of that was thanks to an inspired performance from Jackson, who scored 22 of Warriors' 51 points.

The Scotsoun crowd were on their feet cheering within 30 seconds as the returning Maitland burst through to score a straightforward try for the hosts.

Munster collected the opening drop-kick and a careless pass from visiting captain Howlett was intercepted by winger Maitland who ran on to cross the line with ease.

Not so comfortable was Jackson's conversion which, although successful, almost got charged down by onrushing members of the Red Army.

Despite Warriors' early lead, it very quickly became apparent that Tony McGahan's were men not as shell-shocked as the Glasgow side would have liked.

Munster's scrum led to a threatening attack, with James Coughlan driving it forward. Warriors tried to defend stoutly five metres from the line but play was switched to New Zealander Howlett who made amends to get the try just wide of the right post.

Ronan O'Gara levelled the points with the subsequent kick.

O'Gara tangled with home skipper Al Kellock as the visitors began to dominate and their reward for that came shortly after.

Munster's line-out developed into a driven maul and the ball found its way to prop Kilcoyne who barged his way over the goal-line.

Again, O'Gara converted but Munster's seven-point advantage did not last long as Warriors scored another try from an interception.

Scrum-half Duncan Williams was the guilty party as Matawalu darted in to steal and score between the posts, leaving Jackson an easy second kick to level the scores.

Heartened, Glasgow's attacking instincts returned as scrum-half Matawalu broke and pressured Munster into touch a metre from their line. The resultant line-out was followed with Glasgow being awarded a penalty which Jackson dealt with to put his side ahead once more.

And scrummage infringement by Munster saw them concede another penalty on their 22-line which Jackson scored to extend Warriors advantage to six points at the break.

Glasgow tried to pick up from where they left off but were penalised for holding on after the tackle, allowing O'Gara to kick successfully from 40m to reduce his side's deficit to three.

Excellent build-up from Josh Strauss and Matawalu then allowed Jackson to run over out wide on the left and then step up to convert.

Jackson made it a personal 20-point haul by bisecting the posts with another successful penalty.

Superb left-wing running by DTH van der Merwe was halted by Howlett but seconds later replacement Henry Pyrgos assisted for fellow substitute Bennett to cross the line - a try which brought the bonus point. Jackson kicked well once again before being replaced.

And it did not end there, as full-back Hogg sprinted to score the fifth try down the left, with Duncan Weir stepping up to convert from the touch-line.

Howlett went over for Munster, with Ian Keatley converting, but it was Glasgow's turn again through another interception, this time Barclay running clear to touch-down, leaving Weir an easy kick.