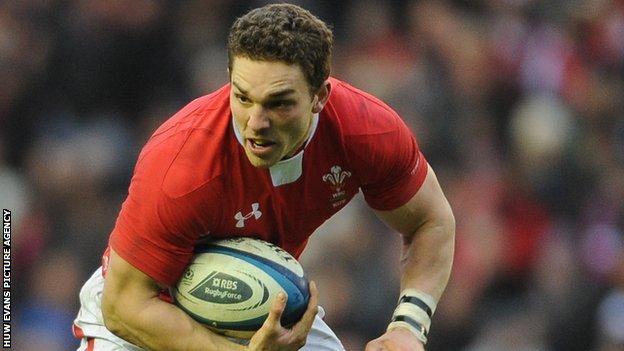 The accusation comes amid the latest row to flare up between the WRU and the nation's four professional regions.

"Scarlets opened discussions to transfer the player with clubs outside the UK in 2012," said a WRU statement.

"George refused to consider France but reluctantly conceded he would be prepared to move if Scarlets wished."

The regions have since responded by saying they were by the WRU's statement.

"George North informed the WRU shortly after the Wales v Ireland RBS Six Nations international on 2 February, 2013 that he had then been told of the transfer proposal," added the WRU statement.

In the debate over the future of the regions, the governing body claims to have offered in August, 2012 to discuss centrally contracting players such as 20-year-old North.

And in November, 2012 accountants PriceWaterhouseCoopers on the regions' finances and management up to April, 2012.

"No meaningful response from the regions has been received by the WRU," the statement added.

"The WRU revisited the issue of George North and agreed to consider assisting in a financial model to retain him in Wales with one of the four regions.

"In recent days the WRU has discovered that the regions signed an agreement which precludes any of them playing an individual who is centrally contracted to the Union.

"The WRU urges all four regions to abandon this stance and return to the negotiating table."

The statement also wants the regions to "abandon the practice of selling Welsh-qualified senior players for profit before their contracts are concluded".

WRU chiefs also want the regions to inform each other when they consider selling or releasing any "elite, Welsh-qualified player".

Gallacher, who represents the Scarlets, Ospreys, Blues and Dragons, admitted on BBC Sport Wales' The Back Page programme that "there are massive hurdles to climb" to achieve that aim.

He also stated the sport's Professional Regional Game Board (PRGB) - established in late 2012, representing the WRU and regions - has yet to meet.

The WRU says the regions attempted to "amend" the PRGB's founding principles in early 2013 and the governing body says it has presented a fresh proposal for a PRGB and is awaiting the regions' response.

The WRU says it funds the regions to secure player release for Wales duties with a sum in excess of £6m, split between the four regions annually as part of a yearly £15m total.

"It is important to note that the WRU seeks to help the regions create long-term rugby and business sustainability," added the statement.

"Demands for more money do not address the fundamental problems."

On Saturday, 30 March the WRU hosted the first regional double-header at the Millennium Stadium in which Cardiff Blues and Newport Gwent Dragons forfeited home advantage.

The Blues lost to the Ospreys while the Dragons succumbed to the Scarlets.

However, the WRU says the Blues and Dragons will have profited off the field on a day when more than 36,000 fans turned up for an event that was marketed as 'Judgement Day'.

The WRU says it has underwritten the event's costs for a further three years and offered to host other "major events" involving the regions at the Cardiff city centre venue.

"This initiative was first proposed to the regions by the WRU in 2007," said the governing body.