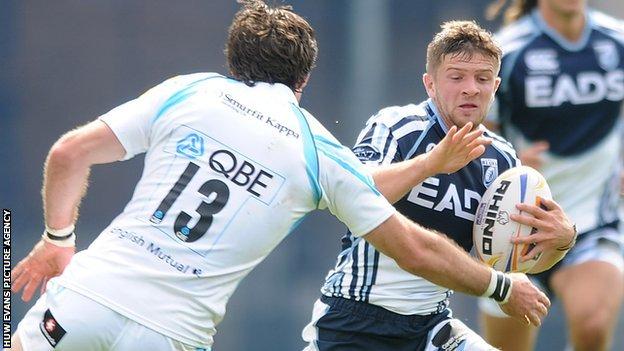 Worcester chairman and backer Cecil Duckworth says the prospect of a full-blown, top-flight Anglo-Welsh league is "worth looking at seriously".

They did so amid ongoing fears about their

"I don't know how the rest of us [Aviva Premiership clubs] would respond, but I know that it has been considered in the past.

"The idea that Cardiff or the Ospreys or the other two regions coming up here to Worcester, I'm sure would be very well received.

"But we're close to the Welsh border, so we have a slightly privileged position.

"That would apply, of course, to Bath and also Gloucester, so I'm sure they would quite favour the idea. It sounds good to me, initially."

Duckworth says the concept of a new competition "could well" happen in the future.

Welsh and English clubs already play each other in the cross-border LV=Cup, but that is a second-tier competition largely taking place when leading players are on Test duty in the autumn and during the Six Nations.

And officials in Wales and England are conscious that the future of European competitions beyond the start of the 2014-15 season have yet to be resolved.

If that dispute remains unresolved, the leading English and Welsh teams could be faced with fixture schedule gaps.

The Aviva Premiership clubs' row with Heineken Cup and Amlin Challenge Cup tournament organisers centres on the future broadcasting of those tournaments.

to their home European games to BT Vision from the start of the 2014-15 campaign.

But European Rugby Cup (ERC) are among the bodies who say the English clubs had no right to do so.

Speaking about a possible new Anglo-Welsh tournament, and alluding to the issues over Europe, Duckworth added: "We have a full year with the LV=Cup and we have commitments going forward.

"But in a couple of years or so time when those arrangements have to be renewed, or altered, or we change direction a little, then that's [an Anglo-Welsh league] a possibility, of course.

"I would have thought it would be good for us and good for Wales. I'm sure it would be something worth looking at seriously."