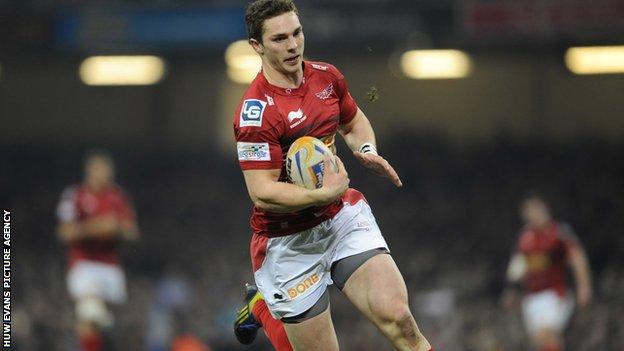 The Welsh Rugby Union has invited the four regions to a meeting to discuss central contracts.

The offer comes amid a row between the governing body and the regional sides over the future of Scarlets wing George North and other Wales stars.

The WRU wants to control the contracts of "key Welsh rugby talent" to ensure they stay in Wales.

A "range of detailed options" will be put to the regions at the meeting, according to the WRU.

In a statement, Welsh rugby's governing body said: "The WRU invites representatives from each of the four regional organisations to a meeting at the Millennium Stadium to discuss the contracting centrally of key Welsh rugby talent.

"The WRU asks the four regional organisations to put aside their agreement not to play centrally contracted players and work with the Union to help secure the future of our young players in Wales."

The WRU has accused the Scarlets of trying to sell Wales wing North to clubs in France without the player's knowledge.

North, 20, who has a year left on his contract at Parc y Scarlets, has been linked with a move to Northampton Saints in the Aviva Premiership.

While the Wales national side have won back-to-back Six Nations titles, the Welsh regions have struggled to retain their international players from the big-spending clubs in France and England.

The regions have also had financial difficulties of their own, but attempts with the WRU to stem the tide of talent leaving Wales have led to nothing.

The WRU claimed it was prepared to provide the backing to keep North in Wales by tying him to a central contract, only to later discover the regions had an agreement in place not to field any player contracted to the Union.

The Scarlets issued a statement of their own and dismissed the claim that any discussions were had with the WRU about any kind of contract or help in keeping any of their players in Wales.

The governing body now wants discussions to take place over the implementation and merit of central contracts.

The statement added: "The WRU will table, in advance of the meeting, a range of detailed options to be discussed, in addition to those already proposed, so that the four regional organisations are fully prepared to take part in a meaningful debate.

"The WRU would also welcome suggestions from the four regional organisations on how best a centrally contracted player system would work to help safeguard Welsh rugby."