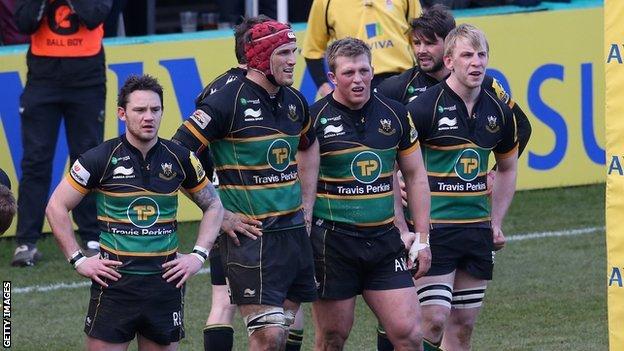 "Embarrassment was the word Jim used in the changing room and that sums it up," Dowson told BBC Radio Northampton.

"Leicester turned the screw and fair play to them, they gave us a real lesson and it's something we have to learn from and move on from."

Northampton were 12-3 down at half-time and then overrun by four second-half Tigers tries at Franklin's Gardens.

Saints are still clinging onto the fourth and final play-off place in the Aviva Premiership, but are level on points with fifth-placed Gloucester, with three games of the season remaining.

"This is a big down to lose to local rivals so heavily and get really hammered at home. It's a big lesson," said 31-year-old flanker Dowson.

"We know the fans are disappointed. We were on a decent run but we've been brought down to earth with a bump.

"We need to dust ourselves down for the last three games."