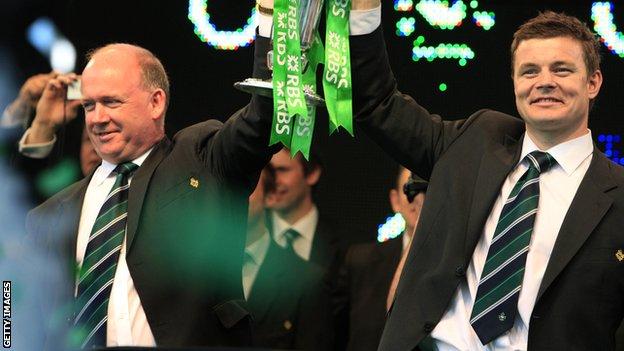 Declan Kidney has been removed as Ireland coach after a five-year reign.

Kidney, 53, led Ireland to the 2009 Grand Slam but this year they could only finish fifth in the Six Nations.

The Irish Rugby Football Union revealed it would not offer him a new deal when his contract expired at the end of June and that he was leaving immediately.

An IRFU statement thanked him for the "unquestionable commitment, passion, professionalism and success he has delivered to Irish rugby".

Since the 2009 Grand Slam triumph, Ireland have won only 16 out of 40 Tests, while their performance in this year's Six Nations was their worst in the Championship since they ended up with the Wooden Spoon in 1998. They have also slipped to their lowest ever world ranking of ninth.

"We would like to sincerely thank Declan for his commitment to Irish rugby," said IRFU chief executive Philip Browne.

"With a host of new and emerging talent at every level, and despite the clear challenges ahead, we are confident of securing another world-class coach to work with this talented and ambitious group of Ireland players."

The decision to axe Kidney was widely expected and was made following an in-depth review process carried out by the IRFU's National Team Review Group (NTRG), which will now lead the search for a new coach.

Ireland's tour of North America - they play the USA in Houston on 8 June and Canada in Toronto on 15 June - will be led by interim head coach Les Kiss, who will be assisted by Gert Smal and Anthony Foley.

The 2009 Grand Slam was the undoubted highpoint of Kidney's Ireland reign.

In the 2011 World Cup, they lost against Wales in the quarter-finals and last summer they suffered a record 60-0 defeat against world champions New Zealand.

Ireland began the 2013 Six Nations campaign with an impressive win away to eventual champions Wales but back-to-back defeats against England and Scotland were followed by a draw against France, before a surprise loss in Italy on the final weekend.

There were some extenuating circumstances during the championship, with Ireland dealing with a debilitating injury list that robbed them of key players such as Paul O'Connell, Jonathan Sexton and Simon Zebo.

But their inability to rediscover the heights they hit in 2009 meant Kidney's future was under scrutiny long before the final defeat in Rome.