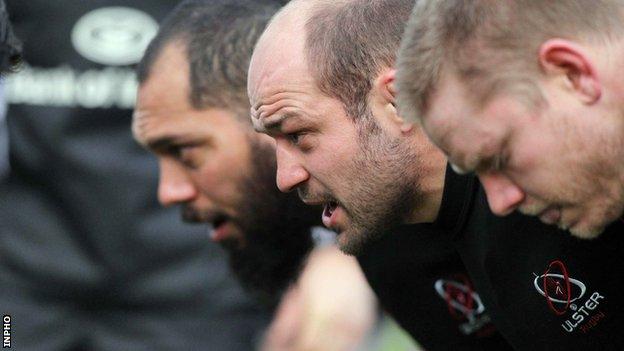 Ulster coach Mark Anscombe expects John Afoa to "step up" on Saturday and prove his late return from New Zealand has not harmed the team's Heineken Cup bid.

Afoa went home last week to attend the birth of his daughter and is missing the squad's three-day training camp in Fermanagh as they prepare for their quarter-final clash with Saracens.

The Kiwi will rejoin the squad for training in Belfast on Thursday.

Anscombe said: "It isn't ideal but he is as professional as any guy around."

Afoa was part of the All Blacks' World Cup winning squad in November 2011 and subsequently joined Ulster on a two-and-a-half-year deal.

The tight-head prop has made several trips back to New Zealand this season.

"What we do take from it that he is as professional as any guy going around," continued Anscombe.

"He knows how to look after himself and he knows what is expected of him.

"So I have full faith and confidence that Johnny was back home in New Zealand doing the right things for preparation."

Anscombe said that Afoa watched Ulster's heroic 22-18 league win over Leinster in Dublin on Saturday from his home in New Zealand.

In his absence, Ricky Lutton and Kyle McCall impressed in the tight-head position.

However, if Ulster's front row struggles against the Premiership giants, Afoa's lack of match practice may be a factor.

"That's the way human nature is, so it is up to him to give an eight out of 10 performance, isn't it?" said Anscombe.

"When you do things like this, you've got to step up.

"We are expecting him to give an eight out of 10, so we'll be pointing the finger too if he doesn't.

"In a perfect world, we might have looked at it in different ways but it is what it is.

"Johnny watched the game on Saturday and was excited by it. He is itching to get back and play. That is all we want."