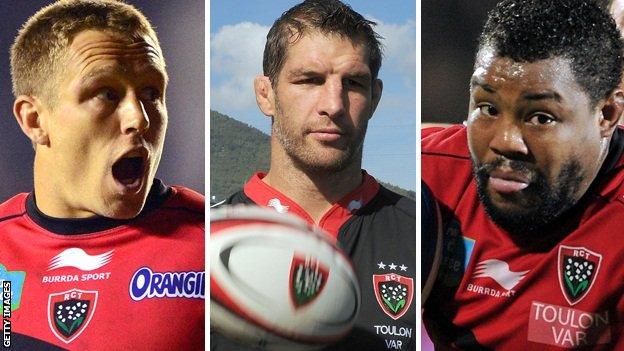 You don't have to spend long in Toulon to find out how important a few Englishmen - and one in particular - are to the town and its rugby club.

South Africa legend Bakkies Botha says: "The people in Toulon treat him almost like a God."

"But he's impossible to hate. His attitude is infectious, he trains hard, he pushes players, he gets the best out of everyone. It's been a pleasure to play with him."

The man they are referring to is, of course, Jonny Wilkinson, the England legend who has just agreed to extend his stay at the French club by another season.

Wilkinson, 33, had initially planned to retire at the end of this campaign and move into coaching and other ventures, but the camaraderie at the club helped persuade him to stay on.

"If it wasn't for these guys, and the coaches and the area, it would have been a decision the other way," the World Cup winning fly-half told BBC Sport. "What makes it work is that guys are bringing personalities and values to the table.

"Searching for excellence week in and week out has been the foundation of their careers. That doesn't just go when you hit 32.

"It's a fabulous place, a fabulous club environment. To play alongside guys that you spent so long playing against, the respect level works brilliantly."

Altogether there are six English players in Toulon's expensively-assembled squad - Wilkinson, Simon Shaw, Steffon and Delon Armitage, Nick Kennedy and Andrew Sheridan. On Sunday, they will all hope to be involved when the club take on Leicester at the Stade Mayol and bid to reach the Heineken Cup semi-finals for the first time.

All the acquisitions were made possible by a huge injection of cash back in 2006 from Mourad Boudjellal, the son of an Algerian immigrant who grew up in relative squalor in the town before making millions in the comic-strip industry. Toulon are now one of the most-talked about clubs in world rugby, but the respect among the different nationalities and star names is clear to see.

About 300 locals turned up to watch the forwards kick a football around at the end of a training session this week. They saw the great Argentine Juan-Martin Fernandez-Lobbe man-marking Sheridan and All Black Carl Hayman directing operations from defence.

Meanwhile, Shaw, still going strong in his 40th year, was patrolling the midfield. His age may be a source of mirth - "you only play rugby for five or six years, or if you're Shawsy 15," says Steffon Armitage - but the lock is another Englishman held in the highest regard by his team-mates.

"When you are turning 34, like myself, you are seen as an old lock," says Botha. "Then I see Simon Shaw turning 40 and I'm a young lock again! It's amazing to participate with players like that."

For the player himself, the fires are certainly still burning. "I'm still feeling very fit and capable of playing at this level," he says.

Shaw, capped 71 times by England and twice by the British and Irish Lions, joined Toulon in November 2011 and is keen to stay on when his contract expires at the end of the season.

"The quality here is immense," he says. "I pinch myself even when I'm sitting on the bench because of the company I'm surrounded by. It's crazy. To play well enough to accompany Bakkies (Botha) in the second row is an honour in itself.

"Nothing prevents me from thinking I could quite easily carry on. The club haven't said anything to me yet, but if I stay for a third season that will be great."

While Shaw and Wilkinson have both played their last games for England, Steffon Armitage is very much at the peak of his career. After joining Toulon in 2011, he has taken the Top 14 by storm, winning overseas player of the year in his first season and continuing his good form during this campaign.

Playing in France means he won't be selected by England head coach Stuart Lancaster, as the Rugby Football Union refuses to consider players operating outside England. Armitage has no regrets or doubts about his move to the south of France though.

"I left England because I got into a place where I didn't really enjoy rugby any more," he says. "I needed something different, and coming here has made me regain that love of rugby. I wouldn't change anything. I've got one more year on my contract and we'll go from there."

A dynamic openside flanker in the classic "fetcher" mould, Armitage has been touted as an outside bet for Lions selection, although the end of the French season clashes with the start of the tour to Australia.

"All I can say is I'm just honoured for people to think I'm good enough to go on a Lions tour," he says. "If it happens, it's the icing on the cake."

Another Englishman, Tom Whitford, has seen this transformation first-hand. Formerly of Cambridge University and Richmond, he played for Toulon for seven years, before becoming team manager in 2007-08.

"When I arrived in 2001 we had been relegated, the National Front was the political party running the town and the town was struggling," he told BBC Sport. "Then Mourad came in. We were in the second division at the time and his first signing was Tana Umaga. That changed the dynamics of the club and suddenly people were looking at Toulon as a force again."

The city, however, is not an affluent place. Although the glamour of Nice, Cannes, and St Tropez lies further down the Côte d'Azur, this a fishing city with a strong working-class ethos, unified by its love of rugby. This ethos also binds a squad of stars together, says Whitford.

"It's not a millionaire's playground at all," he says. "It's still a very working-class town, and at the helm is a man who has come from absolutely nothing. The supporters are still working-class, and we want the new players to buy into the history of the club and keep that connection with the supporters.

"They have reputations already, and they want to enhance those reputations and show everybody they haven't come just for the money. . The players can sense the support just by going to the butchers or the bakers, and if they don't play well and are seen out at a bar later I, as team manager, will hear about it."

And with Wilkinson, Armitage, Sheridan, Botha and Giteau staying on next season, and Bryan Habana on his way from Cape Town, the revolution shows no sign of slowing.

232 comments
Back to top
unknown