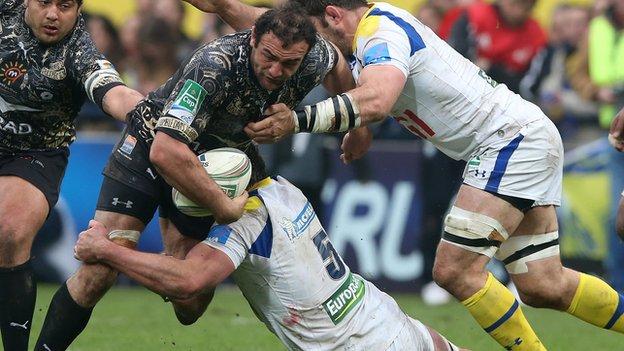 Clermont Auvergne reached the Heineken Cup semi-finals for the second year in a row and will face either Harlequins or Munster after thrashing Montpellier.

The visitors took a 9-3 lead through three Benoit Paillaugue penalties.

But Clermont went in front via Wesley Fofana and Aurelien Rougerie tries.

And further scores from Sitiveni Sivivatu, Wales' Lee Byrne and Napolioni Nalaga saw the hosts stretch away for an easy win, with Timoci Nagusa's late reply no consolation.

The semi-final will be played at the Stade de la Mosson in Montpellier and for the first 20 minutes on Saturday it looked as though it would be the visitors facing a short trip across town in the last four, rather than Clermont heading south from central France.

The visitors started quicker and three penalties from Paillaugue to one from Morgan Parra gave them a 9-3 lead with just over quarter of the game played.

The side from the Mediterranean coast, with Georgia lock Mamuka Gorgodze prominent, were tearing into the hosts and it looked as though their 58-game winning streak at the Stade Marcel Michelin was under threat.

But Clermont are arguably the most complete team in Europe and after weathering the initial onslaught from the visitors they exploded into life with two quick tries.

Flying France centre Fofana secured the first, claiming Parra's cute chip in mid-air before touching down as he hit the deck, before former All Black Sivivatu made his first impression on the game.

The winger popped up in midfield and beat three men before drawing Gonzalo Amorosino to put the try on a plate for Clermont's born-and-bred captain Rougerie, who strode over untouched by the posts.

Parra converted the second try to make it 15-9 and things went from bad to worse for Montpellier as they lost fly-half Francois Trinh-Duc to injury.

After the break Parra missed an absolute sitter of a penalty but Clermont were increasingly on top and pulled decisively clear when Fofana opened up a hole in the Montpellier defence and Sivivatu beat three men on a weaving run to the line.

The hosts killed off any hopes of a Montpellier revival with late tries from Byrne and Nalaga, and Nagusa's fine finish was far too little, too late to derail Clermont's bid for a first Heineken Cup title.