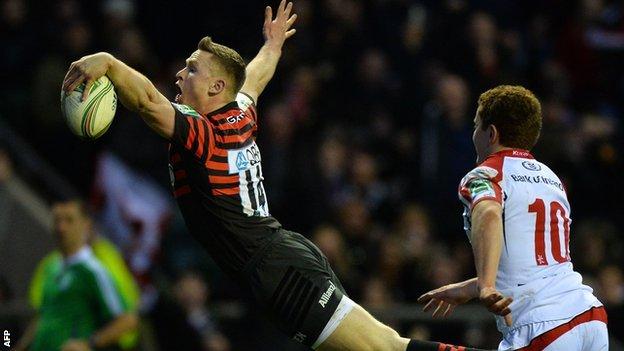 Saracens powered into the semi-finals of the Heineken Cup as Owen Farrell guided them to victory over last year's beaten finalists Ulster at Twickenham.

A brace of penalties apiece from England fly-half Farrell and Ruan Pienaar made it 6-6 after half an hour.

But Saracens stretched clear with a Will Fraser try and conversion and penalty from Farrell.

Saracens will now face either Jonny Wilkinson's Toulon or Leicester back at Twickenham in the semi-finals on Sunday 28 April.

The Londoners were under pressure in the scrum in front of a UK record crowd for a Heineken Cup quarter-final of 37,888.

But Saracens were dominant at both the line-out, with captain Steve Borthwick a constant menace, and the breakdown, and that gave the platform for Farrell and scrum-half Richard Wigglesworth to pin Ulster back with their kicking game.

Once they were into Ulster territory the power of their runners, with Schalk Brits (who limped off just before the hour mark), Mako Vunipola and Joel Tomkins all prominent, combined with their unstoppable driving maul and ferocious defence, saw them home.

The sides were level at 6-6 after half an hour but it could have been much better for Ulster, who saw South Africa scrum-half Pienaar miss two penalties.

Both sides were looking to play with pace but it was power that produced the first try of the game, man of the match Fraser burrowing over after Saracens launched a rolling maul from an attacking line-out - one that was perhaps fortunately awarded to Sarries after the ball appeared to hit Ernst Joubert last.

Fraser tapped the initials of brother Henry, a former Saracens junior paralysed in a beach accident four years ago, that the flanker writes on his wristband before every game, as Farrell landed the conversion.

When powerful Ulster number eight Nick Williams was penalised for holding on after securing Wigglesworth's box-kick, Farrell made no mistake to give the hosts a 10-point lead at the break.

They may not be the most dazzling of sides but there is no doubting Sarries' efficiency and they gradually pulled away in the second half.

A driving maul gave Farrell the chance to extend the lead with his fifth successful kick and although Pienaar replied in kind, Farrell was on target on the hour to make it 22-9.

Ulster were not totally outclassed and flanker Henderson, winger Craig Gilroy and replacement Tommy Bowe, on his first outing since suffering a knee injury in December, all had their moments.

But Saracens' defence was virtually impregnable and it was a turnover that set up the chance for Brad Barritt to send Ashton through a gap in midfield.

The winger rounded the two covering defenders before diving over exuberantly - although he went further away from the posts than necessary and Farrell was narrowly wide with the conversion to spoil his 100% kicking record.

The try meant the result was no longer in doubt and although Ulster finished on a high as Henderson brushed off a couple of tackles to score a late converted try, it is Saracens who remain on course for the final of this season's Heineken Cup.

Chris Ashton on returning to Saracens after England duty in the Six Nations:

"Coming back here the last couple of weeks, getting back into club rugby and playing again, I've been really happy and just wanting to get on with how I want to play.

"They've let me do that, let me go on and do what I want to do and I feel comfortable. I feel confident in the players in the team giving me that space and giving me the opportunity."

On the Ash-Splash try celebration:

"I honestly don't know why I do it - it's just excitement I think. It's been quite a while - sometimes you get the opportunity and today was one of those times."

"They were probably the best team we had played all season. For us to be 27-9 up with five minutes to go says a lot about the quality of our performance.

"We've worked unbelievably hard, especially defensively, where we were brilliant throughout the match. We took our opportunities."

"He has had a lot of stick, but the last three weeks for us he has been exceptional."

"Saracens are a very good team, too good for us today - they deserved their victory.

"They stuck to their game-plan and played to their strengths. I take my hat off to Saracens. They were superb defensively."