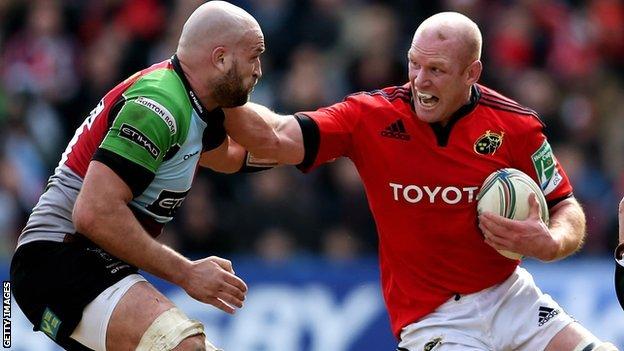 Munster marched into a record-equalling 10th Heineken Cup semi-final after a stunning passage of play early in the second half blew Harlequins away at the Twickenham Stoop.

But the visitors landed four penalties in quick succession to take control.

Evans managed a fourth Quins penalty but they never looked like getting back on terms with the two-time champions.

Their victory means they draw level with four-time winners Toulouse as the only other team to have reached the last four 10 times.

Munster went into the game having won more away quarter-finals in the competition than any other team, and they were also making a record 14th appearance in the knock-out stages.

That meant they could not be written off, but they had also conceded 50 points in their previous match and are struggling in sixth in the Pro12.

Quins had lost three games in a row but with home advantage and their England contingent, including captain Chris Robshaw, all back they looked favourites.

Fit-again second row Paul O'Connell had a big game at the heart of the visiting pack, both around the park and in the line-out, and Peter O'Mahony and James Downey were both hugely physical in attack and defence.

O'Gara recovered from an uncertain start to nail six kicks in a row and Munster's passionate performance left Quins looking shell-shocked well before the end.

And Quins, who were getting the decisions at the scrum in the first 40 minutes, led by three points at half-time as Evans landed a trio of penalties to O'Gara's two.

After a slow start Munster had come right into the game as it approached half-time and they continued in the same vein after the break.

Inside centre Downey made big yards into the heart of the Quins midfield from their first attack and the Munster back row came to the party in similar fashion a couple of minutes later as the visitors laid siege.

Harlequins infringed in desperation both times and O'Gara landed the penalty on each occasion to put Munster into the lead for the first time.

When Maurie Fa'asavalu was penalised for holding on after getting isolated as Quins tried to run out of their own half, O'Gara edged Munster further ahead.

And it took an interception from George Lowe a couple of metres from his own line to prevent the visitors scoring what would have been a superb try after a multi-phase move in which visiting centres Casey Laulala and Downey featured prominently.

The visitors were rampant, with their power runners hammering into Quins and their tacklers smashing them back at every opportunity, and one Downey demolition on home full-back Mike Brown drew cries of "oof" from around the ground.

A sixth O'Gara penalty rewarded the visitors' dominance and although Evans cut the lead to six points with just under 15 minutes remaining, Munster were already on their way to penning yet another dramatic chapter in the epic tale of their European history.