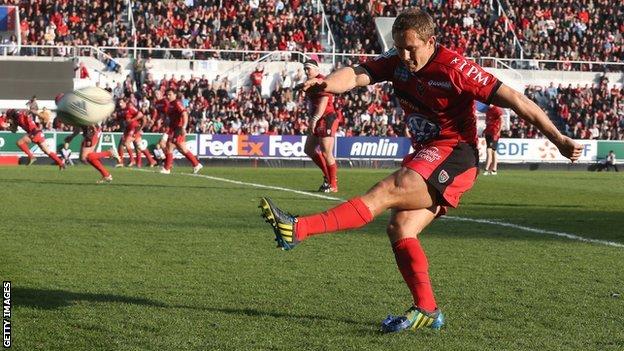 Jonny Wilkinson kicked Toulon into a Heineken Cup semi-final against Saracens as they hit back from a 9-0 deficit to see off dogged Leicester.

The visitors started superbly and three penalties from fly-half Toby Flood gave them a healthy lead after 18 minutes.

But Toulon fought back to 9-6 at half-time through two Wilkinson penalties.

And the ex-England 10 landed four more after the break, to two Flood replies, and a late drop-goal to send Toulon into their first-ever Heineken semi.

Toulon and Leicester are poles apart as clubs, with the former the new-money European arrivistes from the sunny Mediterranean coast, the latter the doughty yeomen from the rainy east Midands who were looking to revive their Heineken Cup glory days from the turn of the Millennium.

Both sides were packed with Test players, although Toulon actually managed to field more Englishmen in their starting XV (five) than Frenchmen (four).

The respective fly-halves, friends and former team-mates playing against each other for the first time, were captains for the day and it was their kicking duel that ultimately decided an incredibly tight match.

But rather than herald Toulon dominance it proved to be an illusion and Leicester soon got well on top in the scrums, enabling Flood to land three penalties from three attempts - including a gem from wide on the right - to reward Leicester's early control.

The Tigers pack was tearing into the hosts, who were being forced into making mistakes and conceding penalties, and it took a Tigers error to help the French hosts finally break their duck.

Flood deliberately knocked on as Delon Armitage tried to find Mathieu Bastareaud on the overlap and with the England 10 in the sin-bin, Wilkinson slotted two penalties to make it 9-6 at half-time.

Toulon had shaken off their early nerves and went into the lead with two more Wilkinson penalties, but Flood levelled just before the hour mark.

It was against the run of play as the star-studded hosts had by now found their rhythm and three times in five minutes they went close to scoring a try.

The rampaging Chris Masoe was brought down just short after a swift Toulon counter inspired by a Steffon Armitage turnover and two minutes later giant France centre Bastareaud was bundled into touch in the same corner by Tigers wing Adam Thompstone after a 30m run.

A try seemed inevitable for the hosts and when Matt Giteau and Bastareaud combined down the right it looked as though the 6ft 8in Botha had blasted over, but the referee ruled he had made a double movement.

It was a lucky let-off for the Tigers, who had seen blind-side flanker Tom Croft taken off with a back problem and also lost prop Marcos Ayerza to injury following an incident with Botha, but they went down to 14 men for the second time when prop Dan Cole was sin-binned for a deliberate knock-on of his own.

Wilkinson, who also rolled back the years with a magnificent defensive performance, landed two penalties to ensure Toulon earned some reward for their purple patch, but Leicester are renowned for their never-say-die spirit and Flood's fifth kick meant that despite Toulon's dominance there were only three points in it entering the final 10 minutes.

Leicester looked under the cosh but a scrum penalty enabled them to lift the siege and they launched one last, desperate attack.

Anthony Allen kicked ahead and winger Thompstone was within inches of grabbing the wickedly bouncing ball a couple of metres from the hosts' try-line, but Toulon secured possession and marched back down the other end for Wilkinson to apply the coup de grace.

A right-footed drop-goal in the 80th minute finally killed off Leicester's defiance and ensured both Wilkinson and Toulon's bid for a first Heineken Cup winner's medal stays on track.