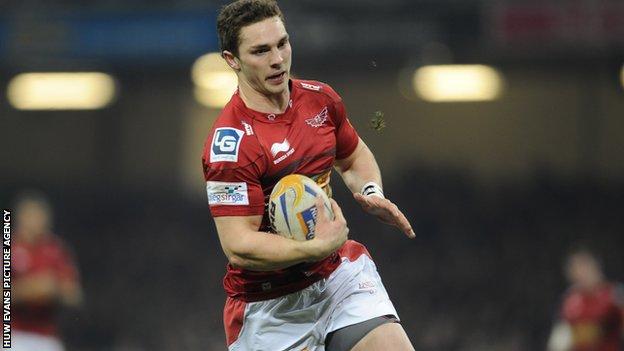 Wales wing George North will leave Scarlets at the end of the season to join Premiership side Northampton Saints on a three-year deal.

The 20-year-old had one year left on his Scarlets contract but was unable to agree fresh terms.

And he took his tally of Wales caps to 31 by featuring in all of his country's games on the way to this year's Six Nations title.

"We made George the very best offer we could," said Scarlets chief executive Mark Davies.

"However, we have to fully understand and appreciate that George's quite unique value in the rugby marketplace, possibly inside Wales, but certainly outside Wales, is considerably greater than the Scarlets as an independent business can reach.

"We are obviously massively disappointed to be losing a player of George's world-class quality and ability from Parc y Scarlets, however we appreciate the reality that the profile and success he has achieved in such a short space of time attracts huge attention and makes him a prized player for any club in Europe."

Saints director of rugby Jim Mallinder added: "George is an outstanding talent and we're looking forward to him being a part of our squad for at least the next three years.

"Despite still being at the start of his career he has shown repeatedly that he has the ability and temperament to succeed at the highest level of the game, and we believe that he will play a big role as we look to take the next steps in our development."

The Llanelli-based region have previously said they sought a buyer for North after he rejected a new three-year deal.

But the Welsh Rugby Union accused the region of offering North to French clubs before the start of the year.

The accusation triggered a stinging response from Scarlets, who were supported by the other three regions in condemning the WRU for discussing North's contract situation in public.

As a result, the issue of central contracts for Welsh Test players has resurfaced, with the WRU inviting the regions to a meeting to explore all options.

Such a model is designed to ensure all the best Welsh players remain in Wales.

By leaving Scarlets, North will join France-bound centre Jamie Roberts and Dan Lydiate in exiting a Welsh region at the end of the current season.

Wales prop Gethin Jenkins has bucked the trend by opting to return to Cardiff Blues from Toulon ahead of the 2013-14 season.

And North's fellow Wales wing at this stage of his career.

However, Mike Phillips (Bayonne), James Hook (Perpignan) and Luke Charteris (Perpignan) are just three of many Wales internationals who have been tempted to leave by the offer of higher wages.

Welsh speaker North, who was born in the English town of King's Lynn, made his Test debut as an 18-year-old against South Africa in 2010.

He scored two tries on that occasion and went on to play a starring role as Wales reached the 2011 World Cup semi-finals, before helping them secure the 2012 and 2013 Six Nations titles.

Since making his debut for the region in September 2010, North has made 38 competitive appearances for the Scarlets - seven more than he has made for Wales.