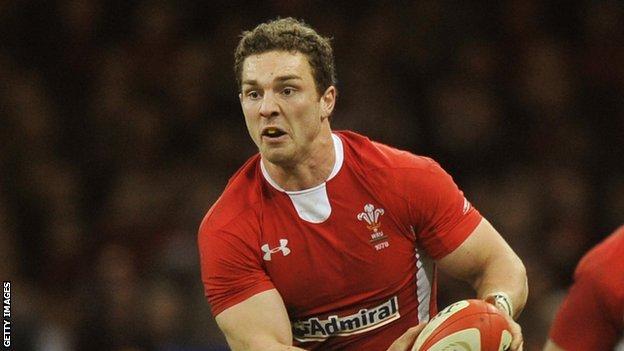 Former England and Northampton scrum-half Matt Dawson says winger George North will be a "good, not great" signing for Saints.

The Premiership side are expected to sign the 20-year-old Welshman from Scarlets for next season.

"He is such a big name, a big player and a talented international. It's huge news across the rugby world," Dawson told BBC Radio Northampton.

"But for Saints I would say it is a good signing, not a great signing."

North has scored nine tries in 10 RaboDirect Pro12 matches this season, and took his tally of Wales caps to 31 by featuring in all of his country's games on the way to this year's Six Nations title.

Saints, who are clinging on to fourth place in the Premiership, who has one year left on his Scarlets deal.

However, neither club has so far confirmed that a deal has been agreed.

"He'll certainly improve the team, but it seems to me wingers aren't necessarily an issue for Northampton," said Dawson, who played over 200 times for Saints and won 77 England caps.

"I think Saints fans get frustrated by not having the playmaker at 10 and 12 that can really dictate the game.

"George North is going to be a fantastic player, but whether it really changes Northampton into a championship-winning side, I'm not so sure.

"He's a great finisher, but the ball has to get to him somehow, and that's where maybe Northampton have been slightly lacking.

"It will take a bit out of the budget to take George North to Saints. Only time will tell whether that is going to be value, compared to getting a world-class fly-half."

That triggered a stinging response from the Llanelli-based outfit, who were supported by the other three regions in condemning the WRU for discussing North's contract situation in public.

As a result, the issue of central contracts for Wales players has resurfaced, with the WRU inviting the regions to a meeting to explore all options.

Such a scheme would be designed to ensure all the best Welsh players remain in Wales.