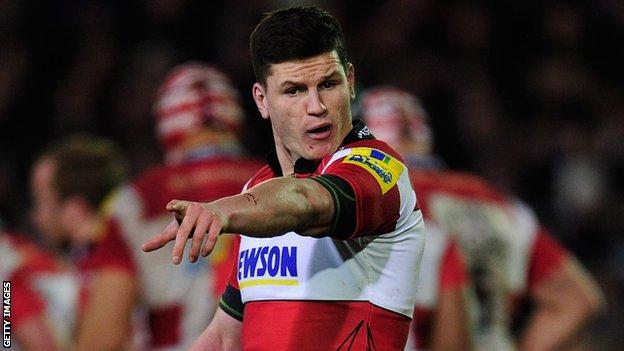 Fly-half Freddie Burns has said Gloucester will gain confidence from their defeat by Biarritz, which saw them exit the Amlin Challenge Cup at the quarter-final stage.

The Cherry and Whites lost 41-31 at home to the current holders.

But England international Burns, 22, believes they will be boosted by the two late tries scored by Shane Monahan and Huia Edmonds.

"We can take something from the last 10 minutes," said Burns.

"We're obviously disappointed to concede 41 points at home but there are lessons to be learnt and we can take confidence going in to the remaining games.

"It was a great learning experience for a lot of the young boys."

However, the number 10 admits he was at fault for Biarritz's first score.

With Gloucester's Dario Chistolini in the sin bin, Burns' windswept boot down-field was gathered by Takudzwa Ngwenya, who powered through and sent Teddy Thomas sprinting across.

"I put my hand up for the first try as when you go down to 14 men, as a 10, you want to try and manage the game," Burns told BBC Gloucestershire.

"You want to find territory and slow it down a bit. One loose kick and they showed how dangerous they are. I'll put my hand up to that."

And after failing to progress in the cup competition, Burns says Gloucester must now focus on their quest for a play-off place in the Premiership.

Nigel Davies' side are fifth in the table - level on points with fourth-place Northampton - with three games left to play.

"I'm ready to push for a big last three games. We've got a big end to the season.

"Our one focus is the Premiership. This [defeat] was probably a kick up the bum and a realisation that we're not the finished article.

"But we're in a good place and the signs are good."