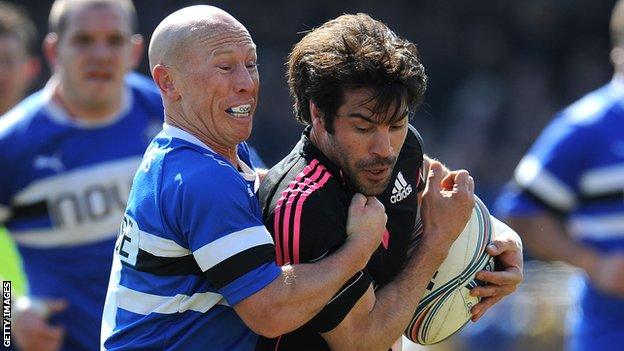 Stade Francais scrum-half Jerome Fillol has been banned for 14 weeks for spitting at Bath's Peter Stringer in their Challenge Cup quarter-final.

An independent hearing in Dublin decided the 35-year-old's actions were "intentional, deliberate and grave".

Fillol pleaded guilty to the charges and expressed "genuine remorse".

TV footage showed Fillol appearing to spit in the face of opposite number Stringer before a first-half scrum in Stade's 36-20 win at the Rec.

It was not spotted by referee Nigel Owens and his assistants at the time, but citing commissioner Eugene Ryan decided Fillol had a case to answer.

Speaking after the match, Stringer said: "There is no place in the game for it. That's as low as you can probably go.

"Obviously it is a bit raw at the moment. When you are on the end of something like that you are rattled by it, but try not to dwell on it."

Stade prop Rabah Slimani, who was cited for a dangerous tackle after being sin-binned just before half-time for a challenge on Nick Abendanon, was cleared of the charge.